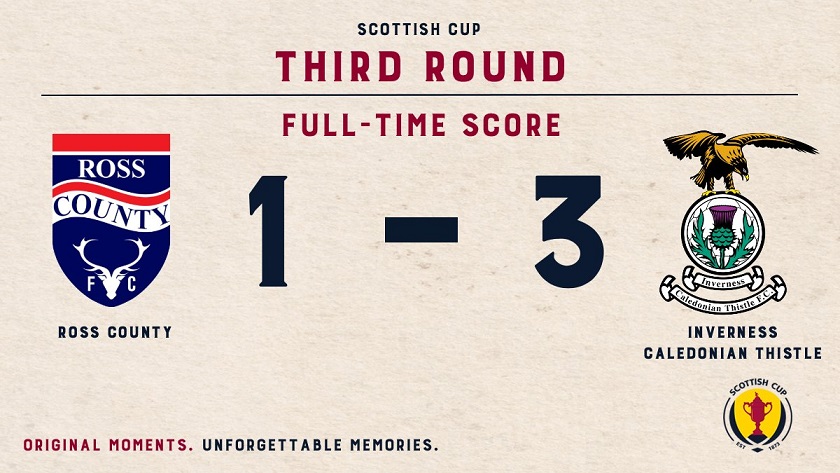 Unfortunately no fans were allowed in for the first Highland derby since April 2019 when County beat Inverness 2-1. This time round Inverness demolished County with a clinical display of finishing to come from behind and win the tie 3-1. It was a dour first half that sprung to life after thirty eight minutes when former Caley Jags favourite Billy Mckay scored with a close range header after a corner had been flicked on. It took Inverness less than a minute to respond when Nikolay Todorov lashed the ball home following a free kick. In truth the game needed the goals as it had been a war of attrition prior to these strikes. County upped the pace in the second half but it's easy to see where their problems lie, a lack of a cutting edge and poor defending would cost them. In the fifty-fourth minute Dan Mackay burst forward on the left, ducked inside two defenders before finishing with aplomb. The best County could offer was a header wide by Jordan White as Inverness continued to look like the team in the top division. The icing on the cake was complete when substitute Shane Sutherland turned in the box to drive home as County failed to clear their lines. Best chance for County was a late scramble in the box but we're getting used to them now and cleared the ball much to the chagrin of the wee team over the bridge.

There has been a lack of Highland derby's recently but tonight there was one in the third round of the Scottish Cup as Premiership hangers on Ross County hosted Championship hopefuls Inverness Caledonian Thistle. Inverness got here after edging out Buckie Thistle in a five goal second round tie. County start their Scottish Cup campaign tonight. Nick Walsh is the man in charge, I wonder who is in charge of Nick Walsh. Previous games he has refereed have been a mystery to both sets of supporters. County have been in charge of the derby's recently and it's eleven games since Inverness won over ninety minutes, a 3-0 victory in Dingwall in 2016. The best defence in the Championship versus the worst defence in the Premiership. Neither team impressing in the scoring game; who will come out on top in this one.

The much awaited Highland derby kicked off on a decent night for football and it was Inverness that took the game to the Premiership side. In truth it was a poor first half and very little of note happened in the first half hour. Devine headed wide early on but neither keeper were involved in anything of note as defences were on top.

That changed when Billy Mckay headed home a flick on from Shaw to put Dingwall ahead. Perfect for Billy, a header from two yards, no missing them for the wee striker. 43 seconds later it was all square when Todorov got the ball inside the box following a free kick by Sean Welsh. Robbie Deas rose highest to nod the ball across the box and Toddy lashed the ball home brilliantly from around twelve yards after steadying himself.

The goals prompted a flurry of activity but it remained level at the break.

The second half saw County playing with more intent, but still without doing anything in the final third.

Daniel Mackay showed them how it should be done with a brilliant solo goal after he cut in from the left between two defenders before drilling the ball behind Laidlaw to put the visitors ahead. A deep corner had been headed clear by Danny Devine and David Carson strode onto it before sending a delightful ball down the line. Danny had plenty to do and did it with pace and accuracy as he left two defenders in his wake before striking the ball firmly under the keeper from sixteen yards.

Still County failed to register anything on target despite a triple substitution just after the hour mark and Inverness were comfortable protecting their lead whilst looking dangerous on the break.

Sub Jordan White headed wide with twenty minutes left in County's best/only chance of the game and as they grew more desperate it was Inverness that sealed the win with three minutes remaining.

One of our own substitutes Shane Sutherland ended the contest when he combined with Roddy MacGregor to rifle the ball home from the angle following a free kick. Another superb finish as Shane took his strike early to score across the keeper from around fifteen yards on the right side of the box.

After failing to get the better of our defenders following a scramble in the box it was over and out for County and into the next round for Inverness.