A squad of Inverness Caledonian Thistle FC Stars from past, present and future took to the field tonight in Barry Wilsons Testimonial Match against Liverpool FC. The fans had been looking forward to this one for weeks, and turned out in force to show their support for Bazza who has always been a firm favourite, despite disappearing for a short stint at Livingston FC between 2000 & 2003.

The heavens opened moments before kick-off and their was a short delay at Barryâs request in order to make sure everyone had made it through the turnstilesâ¦.the 7300+ crowd catching a few late stragglers by surprise no doubt. Then it was down to business, in an impressive performance that was to see Caley Thistle end the night as 5-0 winners.


The match started off a little tentatively, perhaps both teams were just feeling each other out, or maybe it was Ex-ICT players Mann, Sheerin, Ritchie and Bingham taking a few minutes to blow off the cobwebs and get up to speed. Whatever the reason, the first attempt at goal was to be seen about 10 minutes in when Liverpool managed to get a ball in behind the back four. Fraser was quick to advance and narrow the target which resulted in Danny Pachelo shooting narrowly wide.

Paul Ritchie and David Bingham were to be replaced 10 minutes later, but nor before Ritchie managed to get a shot on goal. A few neat passes culminated in him finding himself unmarked in the box, but unfortunately his shot was easily gathered by visiting goalkeeper Dean Bouzanis. The two Heroes from the past were replaced by up and coming stars Rory McAllister and Gary Wood.

It wasnât long before the young lads were linking up well and creating no end of trouble for the Liverpool defenders. Rory was unlucky to shoot wide within 5 minutes of being on the pitch and a crossed ball in to the box looked like it was going to allow âMan of the Momentâ Barry Wilson to open the scoringâ¦but he was to be denied by a goal line clearance.

It might all sound like one way football up to now, but Liverpool were stringing some nice passes together and causing us a few problems in the midfield; however thatâs about as far as they were getting. Our back four was a good mix of youth and experience and if Jamie Duff was looking to learn anything from anyone in this match then he had to look no further than âThe Mannâ next to him. Bobby has lost nothing since he left ICTâ¦and that includes his waistlineâ¦but he still commands a defence better than anyone Iâve ever seen at TCS. His reading of a game is second to none, as are his ability to put a foot on the ball, keep his calm and pick out his pass to anywhere on the pitch.

Guest players Sheerin and Mann were to be replaced shortly after each other with Iain Vigurs and Phil McGuire.

It looked like it could turn out to be a very frustrating night for ICT. Liverpool had done little to threaten Michael Fraser and with Proctor heading wide from a Wilson corner and Wood missing an open goal with 5 minutes left in the half it looked likely weâd head in for the break at 0-0.

However, with 60 seconds left on the clock it was Roy McBain who was to open the scoring for Caley Thistle. Roy claims to be left footed, but Iâm starting to have my doubts as he always seems to score from his right footâ¦and with pace. This time however, the ball merely sauntered over the line after taking a deflection of Liverpoolâs Ronald Huthâ¦.but who caresâ¦it was 1-0 to Inverness.

The fans had barely had a chance to take it in when we got our second, a very embarrassing own goal for Mikel San Jose. It looked like a pass back, but the goalkeeper could only watch in amazement as it flew past him and in to the bottom right corner of the net.

No time to nip to the pie stall tonight as the much awaited half-time entertainment took to the field. It was a Legends match between Inverness Caledonian Thistle and Ross County. This saw the return of Steve âPeleâ Paterson to Tulloch Caledonian Stadium as he managed the Caley Thistle Old Boys, whilst Ross Counties Seniors were managed by Barryâs Dad, Bobby Wilson.

Calder, Brewster, Christie, Urquhart, Mann, Bingham and Ritchie secured victory for the Caley Jags thanks to a spectacular volley from Bingham which was to be the only goal of the game, which seemed to be enjoyed just as much by the youngsters in the stands as it was by those who would have remembered the likes of Urquhart, Calder and Christie from their early Highland League days.

Three changes of personnel at half-time for Caley Thistleâ¦Fraser, McBain and Cowie making way for Esson, Imrie and Black.

The game started a little livelier and it wasnât long before we extended our lead to three. Some neat work down the left looked like it might end with McAllister being chased out of play, but a neat cut back saw Wood with an easy finish from the edge of the 6 yard box.

Liverpool recorded another shot on goal when Esson was forced in to action to tip a shot over the bar which resulted in a corner. Liverpool didnât trouble much from the corner and ICT regained control of the match.

Our fourth goal was to come just on the hour. ICT had a corner, and despite calls from the crowd for him to swerve it straight in to the top corner he played it short to Black who laid it off for the cross which found McAllister who powered it home with the head.

It really was starting to look like four going on fourteen at this stage as Liverpool just couldnât find a way in to the final third of the pitch to create any trouble for us. McAllister and Wood had been working really well together at the front, but they were to be replaced by new signings Alan Rooney and Andy Barrowman.

Barry Wilson was next to leave the field with about 10 minutes to go and he did so to rapturous applause from everyone in the stands...allowing trialist Dan Wagaluka from Uganda to take his place on the field. Either the Liverpool lads wanted his shirt, or they realised the threat his pace presented as they seemed to spend a long time holding on to his shirt. He looks like he could be a very useful player and with the introduction of Zander Sutherland (for Dougie Imrie) shortly afterwards on the opposite side of the pitch we were making real use of the width of our pitch and causing Liverpool even more problems. Dale Gillespie had also taken to the pitch to replace Ian Black.

Another new face at ICT this year, Lionel Djebi-Zadi, had been working tirelessly the entire match, and my report probably doesnât do him justice, but he gets his mention here as his efforts paid dividends with only 7 minutes to go and his cross found Proctor who, after a bit of a defensive nightmare by Liverpool, stuck the ball away to secure the 5-0 victory for the home team. 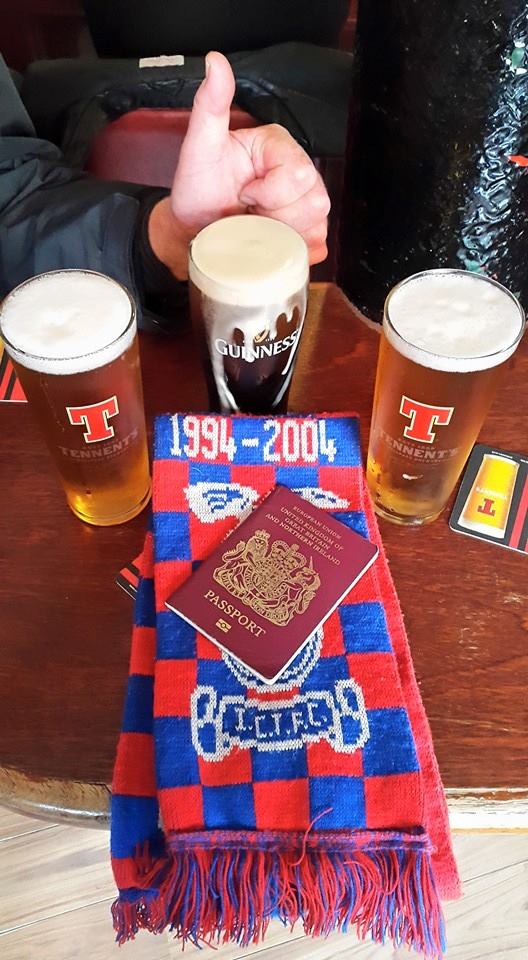