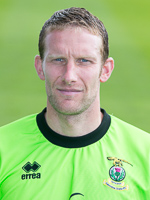 Ryan began his senior playing career at Pittodrie with Aberdeen as a youngster in 1997 and made his first team debut in 2000 v. Kilmarnock, going on to make 89 apps for the Dons.

Moved in the summer of 2006 on a free transfer and signed for Shrewsbury Town where he was unfortunate to break his cheekbone, curtailing his appearances. Spent nearly two years there before being released from his contract in January 2008. Signed a short-term deal with Hereford United in March 2008, making the one start in the final game of the season.

A former Scotland Under-21 and Youth squad player and he also sat on the bench for the senior side against the USA in 2005.

Made his debut for Caley Thistle on 27th August 2008 in a CIS Cup 2nd Rd. tie against Arbroath and went on to make more than 180 appearances for the club. His first manager here was Craig Brewster.

Ryan was the goalkeeper when Inverness won the Scottish Cup in 2015, great servant to the club.

Retired from playing at the end of the 2017/2018 season but remains as a coach at the club, having made 187 appearances.