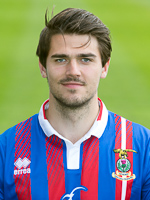 Charlie was born in Calgary, Canada and joined the Vancouver Whitecaps youth program before crossing the country and continuing his development at York University in Toronto. His first professional club in 2012 was the now defunct SC Toronto in the Canadian Soccer League (also no longer in existence).

From there Charlie headed across to Europe and signed for IFK Mariehamn in 2013, TPS in 2014 then KuPS for 2014/15 all in Finland. While playing with KuPS in 2014 he won their Player of the Year and Goal of the Year awards.

In November 2015 Charlie signed with Polish side Korona Kielce in the Polish top division and made his debut in February 2016 but appearances were limited and he transferred to Sandecja Nowy Sącz in March 2017.

A few months later, in July 2017, Charlie went back to Finland and signed for RoPS but after only a month with the club he heard of the interest from Scotland and moved to Caley Thistle on a three year contract.