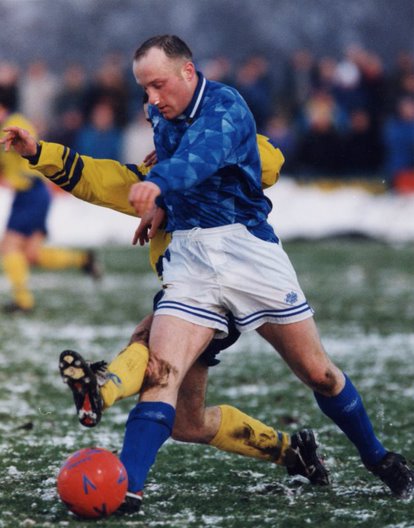 Wilson was an old style left winger who was a great servant and prolific goalscorer for Caledonian. Blessed with plenty of pace and directness, Wilson scored the first ever Caley Thistle goal in the cup win at East Stirling on 9 August 1994. Went to Buckie Thistle July 1995. Later to Bon Accord Juniors.â

Every Caley fan loved Wilsie. He had days when he couldn't hit a coo on the erse wi a banjo, and players such as Martin Lisle used to stand next to him in team photos to make their tans look deeper. But on days such as when he scored an injury-time winner in the 1991 Q-Cup final, or blasted a late 20-yarder past Jim Calder to beat Thistle, or waltzed through the entire County defence, all was forgiven. Joined Caley from Dundee in 1981, and travelled up from Aberdeen to the Caley Park every week for 13 years, plus another year with Caley Thistle, before moving to Buckie Thistle then Bon Accord. Wilsie amassed 494 appearances, scoring 191 times, and won 17 medals.