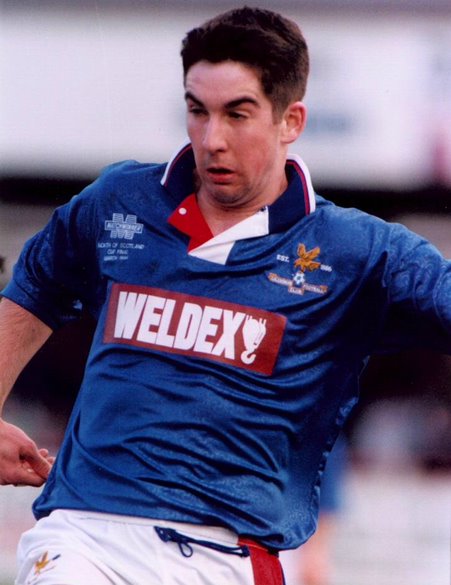 Forward who joined Caledonian from Brechin in 1993/94 and scored 13 goals that season. Signed for Preston in November 1994 then moved to Carlisle, Northampton (loan), Watford. Part of the Watford team that won promotion to the Premiership in 1998-9. Scored the winning goal in the play-offs. Later to Hibernian (loan), Stoke (loan), Oldham, Dundee United, Crewe Alexandra, MK Dons, Bury, Portadown, Burscough & Southport. Later manager of Daventry Town..â

"It's white, it's blue, it hasn't got a clue" was the verdict of the Caley fanzine after a brief honeymoon period. Smart was signed by Baltacha (from Brechin's reserve side) but soon became embroiled in the merger controversy. As an outsider who travelled up the A9 in Sergei's car, his views were not appreciated, and when he scored the only goal in the North Cup Final, many actually booed him. His season with Caley was unspectacular, though soon after the merged club joined the Scottish League, he was off to Preston, Carlisle then Watford, scoring the goal which beat Chelsea in the Premiership. All of which goes to show that people like me know sod-all about football.