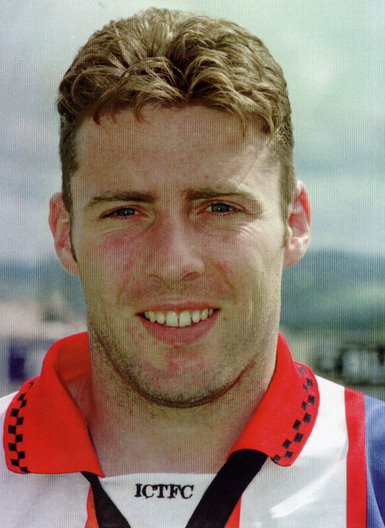 Barry was a legend at Inverness over two spells at the club. Scored one of the goals to secure promotion against St Johnstone in May 2004 and also scored a tremendous header as 'Super Caley went ballistic' at Parkhead.
Also known as 'Millenium Man' having scored the last goal in Scottish Football of the previous Millenium and the first goal of this Millenium. A man for all Milleniums apparently.

Bazza scored his first goal on Saturday, November 23rd, 1996 at Hampden Park, Glasgow: "Wilson made it 2 after a superb solo run and a good shot from 18 yards.
Final goal was on May 10th 2008 against Falkirk: "Best that can be said about the game was Bazza becoming the second top ICT scorer on his own after calmly converting a penalty he himself won in the last couple of minutes, cutting along the byeline and being felled as he moved into the box.