Inverness go into the hat for the fifth round draw tomorrow night, and that's not something that Coll Donaldson can say.

Aaron Doran fired in a tremendous early opening goal but Kevin Cawley levelled before the break. Jordan White headed a second on the hour but again the Wasps struck back through Kevin O'Hara before a late Charlie Trafford header saw Inverness through this difficult tie without the need for a replay.

Happy days for Inverness and even happier for Jordan White who scored a goal and announced a baby boy incoming with his wife Alana. Congratulations from all at CTOxxx.

With Coll Donaldson preferring to play his football over the bridge, and Jamie McCart tellingly on the bench, we drafted fit again Brad Mckay and Kevin McHattie into central defence with Jordan White leading the attack. The good news was that Tom Walsh and Sean Welsh were both on the bench with Tom making an appearance after the interval.

Alloa were without veteran and top scorer Alan Trouten, the onus falling to Liam Buchanan to get the goals. Top Championship shot stopper Jamie MacDonald was in goals for the Wasps with top shut-out keeper Mark Ridgers at the opposite end. Something was going to give.

Thankfully the rain had relented and it was game on, and it only took eight minutes for Aaron Doran to bulge the net after a defensive slip gave him room to score after Shaun Rooney crossed in from the right.

Ten minutes later Alloa were level when Kevin Cawley met a near post corner from Flannigan to squeeze the ball into the net.

Jamie MacDonald had to save from Jordan White as the visitors tried to regain the upper hand but it was the hosts that began to take control of proceedings as Alloa's Jon Robertson shot wide. Adam Brown had two efforts saved by Mark Ridgers in the space of three minutes as the pace of the game increased, Ridgers making a third save from Brown just before the break.

No changes at the interval and Inverness made a strong start to the second half with White hooking a ball over the bar and Ridgers making an excellent save to deny Liam Buchanan.

Tom Walsh made his comeback with Storey leaving the field and after Inverness won a couple of corners, the third one proved fruitful when White headed Doran's ball behind MacDonald to put the visitors back in front.

The lead lasted fourteen minutes this time before Kevin O'Hara volleyed a second equaliser for Alloa from a deflected cross. Game on once more!

Carl Tremarco had a header deflected wide as we looked to get our noses back in front in this see-saw tussle and substitute Tom Walsh was just too high with a shot over the bar as the game entered the final ten minutes.

An unlikely hero would emerge from the pack in the shape of Charlie Trafford when he nodded in from close range in the 86th minute after a Doran corner had been headed back into the box by Shaun Rooney. Scenes!

Goal hero Trafford left the field shortly after scoring with a possible head knock to be replaced by David Carson to see out the final few minutes. 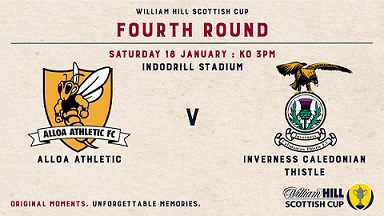