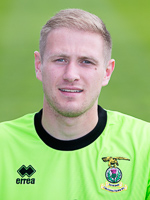 Cammy came through the youth system at ICT and was promoted to the squad in 2015 as cover for the established goalkeepers. He made his debut for ICT in May 2015 as a late substitute for Ryan Esson at Celtic Park in a 5-0 defeat.

In 2016/17 he was loaned out to Elgin City to gain experience but had to be recalled after an injury to Ryan Esson meant ICT needed him as backup. He made 3 appearances in 2016/17. In 2017/18 he was on the bench 5 times but did not make an appearance.

Cammy made 11 appearances in season 21/22 when Ridgers missed out and Cammy kept him on the bench on his return citing 5 clean sheets as the reason.
He has a one year extension on his contract until end of 22/23.