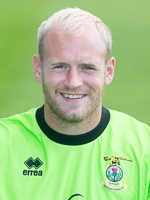 Mark began his career with Ross County in 2006 and made his debut at the age of 15 in a League Cup match against Stranraer. He was transferred to Hearts in 2007 for around 40K and worked his way to the first team squad but not to the pitch. Loan spells with East Fife (twice) and Airdrie Utd followed and he did not make his Hearts debut until 2012. He made 3 appearances for Hearts. He signed for St Mirren in June 2014 and made 25 appearances for the Paisley side. During his time there he was also loaned out on emergency loan to Kilmarnock. He left the club by mutual consent in January 2016.

Mark then took a different direction for the 2016 season and played for Orlando City B in the North American USL league. He decided to return to Scotland at the end of their season and signed a short-term deal with Partick Thistle during the winter transfer window.

Mark signed for Caley Thistle at the start of the 2017/18 season and after a rocky start has firmly established himself as the #1 keeper at the club.

Mark has been capped for Scotland at U19 and U21 level.