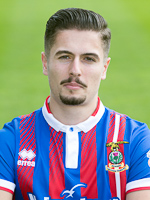 Zak came to ICT from West Bromwich Albion in summer 2017. He was injured at the time of his signing and once recovered went on loan to Elgin City in December 2017. He made his debut for Caley Thistle in March 2018 and will be hoping the 2018/19 season is his breakthrough season.

Zak left the club on 31st August 2018 by mutual consent after making a total of 6 sub appearances.