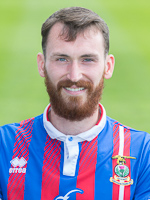 Joe began his career with Celtic youths at the age of 10 and signed professional forms with them in 2011. He made his debut for the club in 2012 against Inverness Caledonian Thistle at Celtic Park.

In 2014 he was loaned out to Falkirk and after failing to win a new deal at Celtic due to injury he signed a two year deal with Motherwell in 2015. He made his Motherwell debut in August 2015 against ... Inverness Caledonian Thistle before finally signing for the club at the end of his Motherwell contract in 2017.