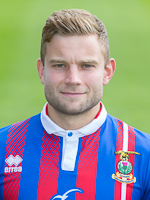 Alex signed a 6 month contract for Caley Thistle in July 2017 but failed to make an impact. He made a total of 10 appearances for the club but left during the January 2018 transfer window.

After leaving ICT he found himself playing in the USL league in USA for Fresno FC.

Alex' first league goal was scored at the Caledonian Stadium but for Ross County !! County were 1-2 winners on Jan 1st 2014.