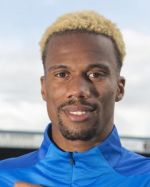 Manny has been at 13 senior clubs in the Netherlands, England and Scotland. Most of these have been lower league teams. He joins Inverness in season 2021-2022 from fellow championship club Raith Rovers where he made twenty eight appearances scoring ten goals. He scored an early penalty in pre-season against Clach. His best spell was at Hayes & Yeading United where he scored 33 goals in 39 appearances.

Unfortunately Manny failed to set the heather on fire and he left the club having failed to score a League goal for the Caley Jags. Manny joined us in the summer of 2021 and made 25 appearances for the club, scoring 2 goals in League cup games against Peterhead and Cove Rangers. Given that we took on four forwards in the January window, the writing was on the wall and he left by 'mutual' consent.