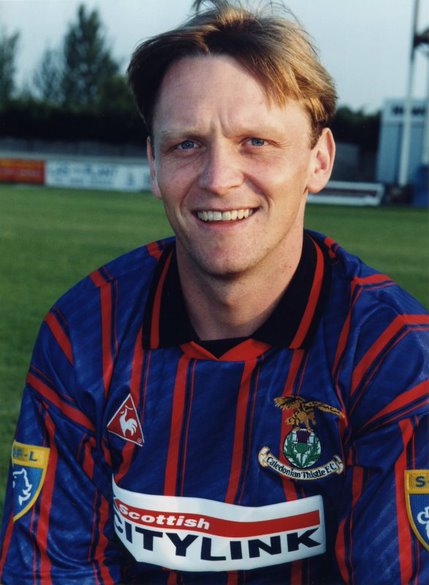 Started in the Caledonian youth programme then moved to Clachnacuddin, Inverness Thistle and back to Caledonian in 1989/90. Combined playing for Caley Thistle with post as first team coach before sustaining a cruciate ligament injury. This resulted in a long spell on the sidelines and prevented a return to first team football. Player/manager of reserve side from March 1996 then Youth Development Coach. Later to Ross County in a coaching role. Returned in July 2003 as Community and Football Development Manager.â Danny only managed 9 appearances scoring once in a Challenge cup game versus Dundee that ended in a 1-1 draw. Danny MacDonald put Caley Thistle ahead in the 2nd minute with a volley after a cross from Dave Brennan.

From Caley Nostalgia Page (http://www.caledonianfc.co.uk/players.htm)
A right-sided midfielder who possessed wonderful skill, Danny suffered a terrible knee injury against Stenhousemuir in the "Scottish" in 1992. After a long period in and out of the game, he damaged it again in a friendly at Bankfoot in July 1993, within 10 seconds of the game starting. He did go on to have a brief spell with Caley Thistle in the Scottish League, but was forced to give up playing. Yet another ex-Jaggie, he made 154 appearances for Caley and scored 47 times.