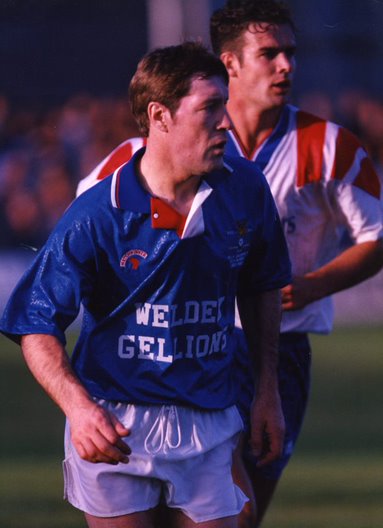 One of the all time Caledonian greats. Caledonian August 1972 to July 1978, Rangers tyo November 1980, Wigan Athletic to August 1981 when he returned to Caledonian. Retired May 1993 but came out of retirement for final Caledonian/Thistle match on 11 May 1994. â

The Legend, and scorer of countless (well at least 401) goals for the Blues. Billy spent the years from 1978 to 1981 with Rangers then Wigan Athletic, sandwiched between two spells at Caley. He won 6 League medals and 6 Qualifying Cup medals with Caley amongst a total haul of 25, and scored 17 times in the "Scottish". Given that Billy represented the Blues 637 times his place in the hearts of the Caley support is assured. That's why, when you log on to the Caley Nostalgia Page, the first image you see is The Legend scoring against Elgin. What a guy.