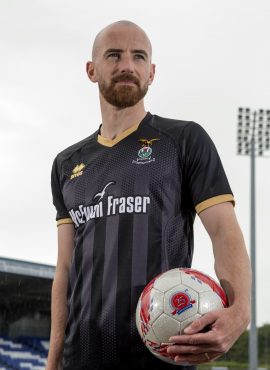 Born in Glossop, Vincent joined Stockport County aged just eight. In 2005, he joined the 'Centre of Excellence' youth system at Stockport, before making his first-team debut two years later, as a substitute in a 1â0 win over Brentford on the last day of the 2007â08 season. The 2008â09 season saw Vincent feature more regularly in the team. He scored his first goal for the club on 18 November 2008 in a 5â0 win over Yeovil Town in the FA Cup.
He played at Kidderminster 2011-2013 before joining Inverness Caledonian Thistle who were in the Premiership and scored on his debut in a 3-0 win over St Mirren on the opening day of the season. The highlight of his time at Inverness was scoring the winning goal in the Scottish Cup final against Falkirk in 2015 as Inverness lifted the trophy after a 2-1 win at Hampden Park.
James moved to Dundee where he only made five first team appearances and was loaned out to Dunfermline Athletic twice. He returned to Inverness and signed a two-year contract on 20 June 2019. James has made over 300 career appearances to date (Oct 2020)