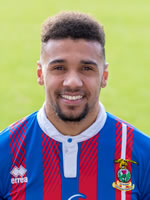 Nathan came to Caley Thistle during the 2017/2018 winter transfer window. He made his debut in the 1-1 draw with Livingston on 2nd January 2018 but appearances were limited for the rest of the season due to injury. He scored 13 goals in 48 appearances for the Caley Jags including a hat-trick against Dumbarton on 14th April 2018.
He left Inverness at the end of season 18/19 to play at Kelty Hearts, citing "to be nearer to family" as one of the main reasons for leaving.