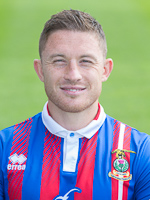 John signed for Inverness Caledonian Thistle in June 2017. He Scored his first goal & his first hat-trick for ICT in a 41 friendly away win at Brora Rangers.

He made his first competitive start in the opening game of the Scottish League Cup group stages, a 30 home win against Brechin City. He retained his starting place for the following match, a 00 draw away at Stirling Albion, a match which set a record as the lowest scoring penalty shootout in Scottish football history. Baird was one of those who failed to score as ICT won the shootout 20.

He scored his first competitive goal for the Caley Jags a week later in a 21 away win at Forfar Athletic, although it wasn't enough for the club to progress from the League Cup group.

Greenock Morton announced on 22 February that they had agreed to sign Baird on an emergency loan for the rest of the 201718 season. He then left the club at the end of the season.