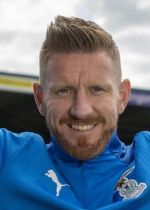 Michael has joined Inverness CT after a successful career mostly at Ross County. Having scored one of the goals that kept County in the Premiership he was surprisingly released at the end of the season 20-21.

Michael has scored a total of 40 goals over two terms at Dingwall, but we won't hold that against him.

Despite regularly being voted for in MotM poll, Gardyne blotted his stay at the Caledonian Stadium after disrupting the harmony of the dressing room and he was shown the door in January 2022 without the blessing of the club. Montrose have since taken him on. Good luck with that!

Terse statement from the club: Michael Gardyne has left ICTFC after the player and the club mutually agreed to end his current contract.

He scored 5 goals whilst he was here, but his off-field antics sealed his fate.