Official report from the league match at the Tulloch Caledonian Stadium against Dundee Utd. Ross Tokely doesn't score many goal... but the equaliser in this 1-1 draw was an absolute cracker!!! Ian Broadfoot reports from the match.

It was another one of these days when nothing went quite right - except for Ross Tokely's spectacular equaliser. The defender's first SPL goal from open play brought Caley Thistle right back into the game after they had conceded an early penalty goal.

The winter arrived with a vengeance earlier in the week but by match day the snow had cleared and all that was left was a bitterly cold wind. The proceedings were delayed for a minute's silence to acknowledge the death of the genius that was George Best. Those of us lucky enough to have seen him in action will long remember his skill and be saddened by both his early retiral from the game and his passing.

It was on with the football but there was little to excite in the early stages. The game came alive in the seventh minute when Mark Wilson chipped the ball from the left into the box for Lee Miller. Miller found space ahead of Grant Munro and the Caley Thistle defender brought him before he could shoot from a good position. Miller dusted himself down and made no mistake from the penalty spot.

In 14 minutes a Russell Duncan ball from 25 yards spun over the bar then a Barry Wilson cross caused some chaos in the United box before it was cleared. Tokely's moment of genius came in 20 minutes when a Wilson corner from the right was headed into the box by Ian Black, Tokely chested it down then sent an overhead kick past Derek Stillie before the keeper even saw it coming.

Alan Morgan came on for the injured David Proctor in 35 minutes. In the closing stages of the first half there were a few chances but nothing to really trouble either keeper. Black hit well over in 36 minutes, a Craig Dargo 22 yard shot on the turn was straight at Stillie then Morgan hit low towards goal from the left but it skidded wide. At the other end a Barry Robson free kick in 38 minutes reached the lively Collin Samuel then Mark Wilson but the danger was eventually cleared. Seconds before the whistle for half time Stillie did well to hold an angled 25 yard shot from Dargo.

The second half was not much better than the first with few chances. Stillie held a Graham Bayne flick in 59 minutes then Brown made the save of the day in 66 minutes when he pushed a net-bound Miller header onto the bar. Something special was needed to add sparkle to the proceedings and the home fans chanted Juanjo's name. He duly came off the bench with seven minutes left but had little time to produce any magic.

Barry Wilson was brought down by his former Livingston team-mate David Fernandez just outside the box on the left with five minutes to go and Stillie made a spectacular diving save from Wilson's curling free kick. The good ICT spell continued when Black made an amazing run into and around the box searching for a space to shoot - he finally crossed and Bayne sent a glancing header past the post. Two minutes over time a cross from Richie Hart on the left was missed by Stillie and amidst the resulting chaos Bayne headed just wide but the assistant referee's flag was up in any case.

The draw kept ICT in eighth place but Dunfermline's 1-0 win over Celtic was the result of the day and closed the gap at the foot of the table. 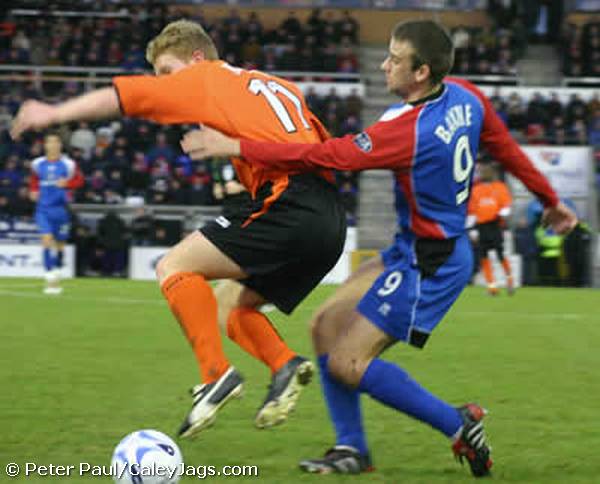