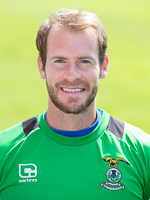 Owain Fon Williams was born and raised in Dyffryn Nantlle, North West Wales. He left his hometown in Wales at 16 to sign for Crewe as he chased the dream of becoming a professional goalkeeper.

Owain left Crewe at 21 in search of first team football and found that at Stockport County where he won their 2008-09 player of the year award. Fon Williams had stints at Bury and Rochdale before settling down at Tranmere Rovers where he spent four years and played over 180 matches.

Fon Willaims signed for Inverness on the same day of the club's first ever Europa League match against Astra Giurgiu and made his debut in that game. Owain saved a penalty against Motherwell on his league debut and played all 38 league matches in the 2015/16 season.

Owain was first called up to senior Wales squad in 2009 and has remained a part of it ever since. He made his debut for Wales in 2015 and was subbed on for the final 16 minutes in a 3-2 loss to the Netherlands.

Fon Williams was named in Chris Coleman's Wales Euro 2016 squad alongside the likes of Gareth Bale, Aaron Ramsey and Ashley Williams. Wales made it all the way to the semi-finals of the competition but were knocked out by eventual winners Portugal.

In Feb 2018 he was signed on loan to Indy Eleven in the USA by new Coach Martin Rennie - originally from Thurso.

Owain is a talented artist in his free time and his works can be seen on www.owainfonwilliams.com