It finished honours even at the Tulloch Caledonian Stadium after a more recognisable Hearts team - with Pressley restored to it as captain - held Caley Thistle at bay. Club Historian Ian Broadfoot reports from the match.

A good point earned against Hearts but with a rub of the green it could have been three. The unrest and management confusion at Hearts did not stop them from being dangerous opponents but Caley Thistle matched them in every department.

Mark Brown came back from suspension to take his place in the home goal with Mike Fraser reverting to the bench, Ian Black came in for John Rankin and Dennis Wyness replaced Graham Bayne in the starting line-up.

The big news from Hearts was that Stephen Pressley was back in the team and as captain. As the teams ran out the cameras were all trained on the Directorsâ box to see the arrival of Vladimir Romanov and returning manager Valdas Ivanauskas, team matters were however still in the hands of Eduard Malofeev for one more match.

Caley Thistle strode upfield from the kick-off but Hearts immediately counter-attacked and Paul Hartley sent an angled shot over the home bar from the right of the box. With five minutes on the clock a long Grant Munro free kick was met on the volley by Craig Dargo six yards out and he forced a good save from Craig Gordon â it all looked good but the offside flag was up.

Another Munro free kick four minutes later led to a blocked Wyness shot and a cleared Roy McBain header. It all went rather quiet until the 26th minute when a Dargo pass set up Barry Wilson just outside the box. Wilson sent a strong bouncing shot goalwards but Gordon showed his class to divert it for a corner.

On the half hour mark Saulius Mikoliunas robbed Ross Tokely but his on-target shot was parried by Brown. In 35 minutes a Wilson chipped free kick led to danger that was only ended when Gordon bravely smothered the ball under pressure.

Gordon produced his best save of the match in 41 minutes when Black headed a Richard Hastings cross towards the top corner and the âkeeper tipped it up in the air before catching it on the way down.

Hartley was in a dangerous position five minutes into the second half but he slipped before he could shoot. With an hour gone Pressley volleyed well wide then a Mikoliunas shot from 18 yards was blocked. Bruno Aguiar tried a spectacular shot in 75 minutes but it safely cleared the bar.

Caley Thistle substitute Richie Hart sent in an excellent cross a minute later but Dargoâs header was saved by Gordon. The closing period was almost all Caley Thistle and in 79 minutes a long Dargo run was set up by a neat Russell Duncan pass. Dargo headed straight for goal but his final shot went wide.

Graham Bayne came on for Wyness and his height and strong presence caused the Heartsâ defence additional problems. Seconds after he arrived on the scene he latched onto a Munro free kick and headed across goal for Dargo â Gordon stepped in to save. In the closing ten minutes Hart hit wide from long range, Ross Tokely also struck wide, Gordon saved from McBain and Darren Dods headed off target.

Brown had been rarely troubled but with three minutes of normal time left Hartley sent in a long shot which the âkeeper expertly tipped for a corner. In added time Julien Brellier slid in to deny Wilson a shot then a Bayne effort was cleared. The last action was a bouncing shot from Hart that ran wide.

A fine ICT performance but just one point and seventh spot retained. 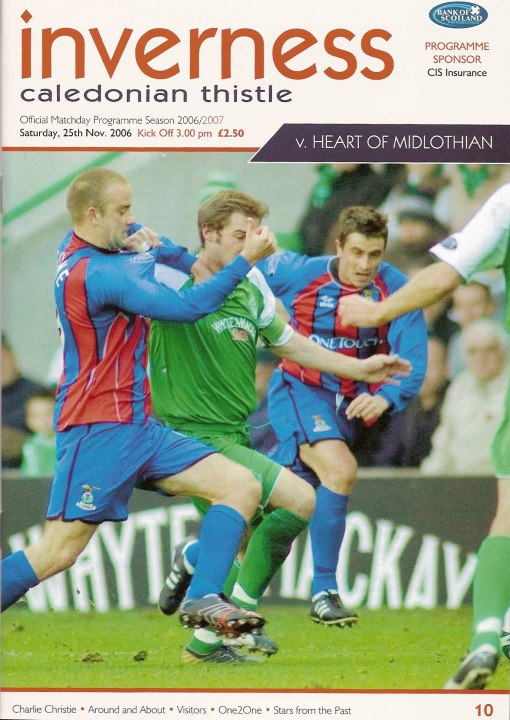