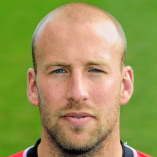 Ross was signed by Steve Paterson from Highland League side Huntly in 1996. He made his first appearance for the club in a Coca-Cola Cup-tie on 3rd August 1996 against Clyde and helped the side win the Third Division Championship at the end of that season.

He gradually established himself in the side, usually playing at right back, although more recently he has been playing in central defence. He was a major influence in the team as they progressed through the Scottish Football Leagues to the First Division and one of his highlights was scoring a fantastic goal against his boyhood heroes Hearts in the 2002 Scottish Cup, hitting a 20 yard shot into the top corner at Tynecastle as Inverness defeated another SPL club, having already won 3â1 at Celtic Park in 2000.

He was a mainstay in the side that won promotion to the SPL in 2004, by winning the First Division Championship and also winning the Challenge Cup.

After 10 yearsâ service to the club, he was awarded a Testimonial Match against Sheffield United. Throughout their five-year stint in the top league, he has been a rock in the Caley Thistle defence. He suffered dismay when the club were relegated to the First Division but played a major part in helping them back to the SPL in one season. Made captain of the team for his 500th appearance for Inverness in a 1â0 win against Airdrie United. He agreed a new contract with Inverness in June 2010, despite receiving offers from overseas.

Rossco went on to make a record 589 appearances for the Caley Jags over 16 seasons 1996-2012. What a legend Rossco was. Partial to a red card, he was sent off eight times in his career and booked 89 times. But what a career it was.

His first goal was against Albion Rovers on Feb 15th 1997: In 77 minutes Ross Tokely made it 2-0 with a tremendous 20 yard drive after good work on the left by Daisy Ross.

His final goal was against Hearts on Nov 26th 2011: Hayes sent a looping ball into the box where it was met by Tokely, stooping to get to the ball ahead of Webster, and he nodded it past Kello from about five yards.