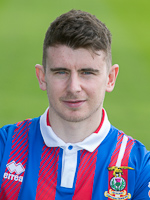 Aaron came to the club on a six month loan from Blackburn Rovers in Season 2010-11. He returned to Rovers at the end of that season. Rovers then released him and he signed a two-year contract with ICT, despite other SPL sides showing an interest.

In his first season he suffered a couple of shoulder injuries that ruled him out for most of the season. 2012/13 was possibly his best season so far with the club and he was instrumental in a fine run of results which drew praise from then manager Terry Butcher and also earned him a Premiership player of the Month award. At the end of the season he signed a new three year deal. He was again an ever present in the 2014/15 squad but more nagging injuries limited his play in 2015 and 2016. He made a comeback in 2017 and was promoted to vice-Captain of the side in 2018.

Aaron was capped for Republic of Ireland at U21 level.