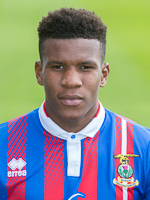 Riccardo joined Aston Villa at the age of 9 in 2005 and at 17 years old was part of the Villa U19 team that beat Chelsea in the 2012/13 NextGen Series, a competition that featured 24 highly ranked European teams including Celtic, Barcelona, Ajax, Juventus, PSG, PSV and Sporting Lisbon. He also made 4 appearances for the England U17 team in 2012