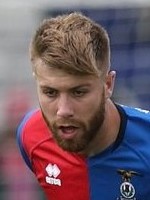 Shaun was born in Bellshill, North Lanarkshire and started his career playing youth football with Bellshill Boys Club and Dundee United, before signing with Scottish League Two club Queen's Park in July 2013. His impressive performances in 2014 saw him named as the club's Young Player of the Year and also named in the PFA Scotland Scottish League Two Team of the Year

Before the start of the 2015/16 season Rooney went on trial with both Hearts and St Mirren, however he eventually signed with Dunfermline. He joined York City at the start of the 2016/17 season and after their relegation he returned to Scotland and signed a one year deal with Queen of the South for the 2017/18 season. In April 2018 he signed a pre-contract to join Caley Thistle ahead of our 2018/19 campaign.