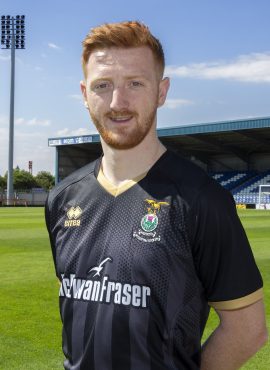 David Carson spent his early career with Ashington. In 2014, Carson signed for Blackburn Rovers but he returned to non-league, playing with South Shields, Whitby Town and Morpeth Town from whence he came to ICT from on a free transfer on 15 May 2019. Carson signed for Scottish Championship side Inverness Caledonian Thistle. John Robertson tipped him for success. He has made 37 appearances for Inverness but he has yet to score although he likes a yellow card gaining 8 bookings prior the the 20/21 season. His last season in Evo-Stik East League saw the 23-year-old named league player of the season, as well as making the league team of the year, as Morpeth Town secured a league and Cup double. David missed the start of season 20/21 through injury. He scored his first goal for the club in a 1-0 win over Dunfermline in his 47th appearance following MotM performances in his previous three games at right back.
David has extended his stay by adding three years to his contract announced on 15th April 2021 which keeps him at Inverness until end of season 2024 and was the supporters player of the year choice.