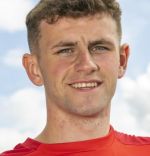 Signed on a one year loan deal from Norwich City.
Reece is getting known for scoring spectacular goals with powerful shooting. Reece left Inverness at the end of the season after scoring six spectacular goals in 35 appearances. His goal v Dunfermline was voted as the clubs goal of the season. He has since signed for Tranmere Rovers on a two year contract. Keep an eye on this one!