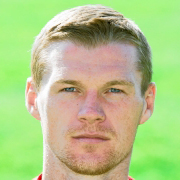 Billy was first signed from Northampton Town on July 2011. He spent three and a half seasons at the Caledonian Stadium and earned the fans chant "He scores when he wants" after scoring regularly. He left in January 2015 when he signed for Wigan Athletic. His second coming was as a loan player in January 2017. Up to the start of season 2021-2022 he has scored 65 goals in 157 appearances. He blotted his copybook with Inverness fans by joining Ross County where he made 102 appearances scoring 32 goals. However he has signed on again at Inverness for season 21-22. Billy has made 11 appearances for Northern Ireland but has yet to score for the national team. Billy is closing in on record scorer Dennis Wyness (102). The countdown is now on since he scored his 92nd goal against Morton in Jan 2023.

Original Bio: Recently signed a new two-year deal. Joined the club from Northampton Town but began his career with Leicester City and came through the Academy where he was a prolific goalscorer. Opportunities didn`t arrive with City and he signed for Northampton Town in the summer of 2009, going on to make over 70 apps. for the club. In a Carling Cup match, he played and scored against Liverpool. A Northern Ireland Under-21 internationalist. Became a regular in the side at the beginning on 3rd December 2011 and scored his first goal the week after in a home match against Dundee United. Lightning quick and very skilful he will be looking to add to his tally of three goals scored last season. Scored against St Mirren in opening SPL fixture this season.