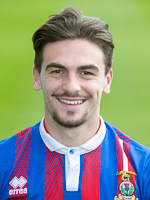 George originally came to ICT (squad No14) from AFC Wimbledon where he had been since the age of 11 after coming through their youth ranks. He signed a professional contract in 2014 but spent much of the next 3 years on loan or injured and managed just 11 appearances for the Dons and 15 for the teams where he was loaned.

He signed for Caley Thistle in July 2017 and managed 12 goals in his 44 appearances for the club in his first season. He left Inverness having scored 17 goals in 63 appearances to sign for Hamilton Accies in January 2019. He has been at Bulgarian club Pirin Blagoevgrad, Kilmarnock and Woking since leaving Accies in 2020.

George has re-signed for Inverness before the start of season 22/23 on a two year deal and celebrated by scoring in a pre-season friendly at Forres later that day. He scored the winner on his second debut in a 1-0 win over Kelty Hearts in the League Cup on 9th July 2022.

Inverness Caledonian Thistle can confirm that striker George Oakley has left the club by mutual consent in January 2023.
George played 86 games and scored 21 goals across his two spells with the club.
Weâd like to thank George for his contributions across both his spells at the club and we wish him all the very best for the future.