Inverness drew 1-1 with Dundee United in Richie Foran's first competitive home game in the Betfred League Cup group stages. United went on to claim the bonus point scoring all four of their taken penalties with only Carl Tremarco scoring for ICT

Inverness held the upper hand in the first half without over extending the United defence. Scott Boden headed home the opener ten minutes before the break. United responded well after the interval and scored a superb equaliser through Stewart Murdoch. Simon Murray should have won the tie for the Arabs but placed a shot the wrong side of the post. Late flurries from the hosts brought out a couple of good stops from Cammy Bell but it ended all square after ninety minutes.

Old Caley Girl has this excellent report for us.

Scottish football fans quite often express a liking for summer football however, attendances in this cup are maybe are not backing up this talk. A disappointing attendance for a 3pm kick off against arguably the top tie in group C.

This also may be the only chance ICT fans will have to see Dundee United this season following their relegation to the championship before the summer. It was a new look United side with Willo Flood back on board and Cammy Bell between the sticks. For ICT it was a home debut for young keeper Cammy Mackay and a chance for the home fans to see the new signings including striker Scott Boden.

Most of the ICT faithful are hopeful of seeing more attacking football under Foran and they werenât disappointed with the attacking style of play on display. However, although dominating possession in the first half, it took until the 35th minute to break the deadlock. A Tremarco throw in was flicked on by Warren to the head of Boden and straight into the net. Cammy Mackay was rarely threatened at the other end in this half with the defence standing firm. Toshney hitting the bar was perhaps their best opportunity although a flag had gone up prior to this.

This was to change in under a minute following the resumption of the second half. Caley Thistle were caught cold when Murray found Spittal following a run on the right where Warren was skinned. The ball was cut back quickly to Murdoch who gave Mackay absolutely no chance from twenty yards.

We huffed and puffed for a while but eventually regained the bulk of possession. The home debut for Jake Mulraney half way through the second half gave United problems with foul after foul being committed to try to stop him. Richie Foran is sure he will soon become a fans favourite and his fast pacey football makes him one to watch. Unfortunately little protection was coming his way from ref Euan Anderson and I would imagine he knows he was in a game with bruises to prove it. Both teams had chances to win this with Simon Murray chipping wide when it looked easier to score, and our best effort being perhaps a free kick from Tansey that was well saved by Bell who also saved Polworth's shot from the rebound.

A point apiece then at full time but in another first, a penalty shoot-out was held with the lure of a further point on the board for the winners. Obadeyi stepped up first sending Mackay the wrong way with a left handed shot into the net. Tremarco dispatched his penalty for ICT then Donaldson for United in a carbon copy of their first. Next up was Tansey who unexpectedly saw his effort saved by Bell. Murdoch dispatched his efficiently leaving Ross Draper to try and save the day. Unfortunately his right footed effort to the left hand corner was poor and saved easily by Cammy Bell. All that means is that United get an extra point in this group stages.

Early days then for our rookie manager but he will, Iâm sure, be disappointed we didnât manage to secure all 3 points within the 90 minutes. This now leaves us with no room for any further slip ups if we have any ambitions to progress in the competition. Steak Bridies await Caleyaway on Tuesday at East End Park and nothing less than a win will do.

OCG MotM:- goes to Kevin McNaughton with an impressive home debut with honourable mention going to Cammy Mackay for whom a great future hopefully awaits. 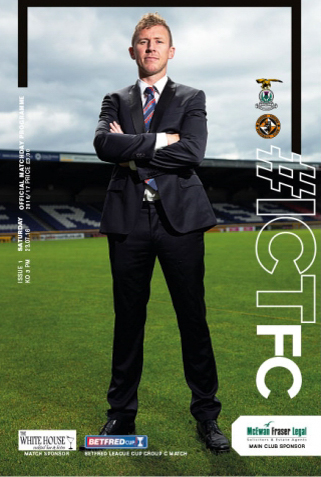