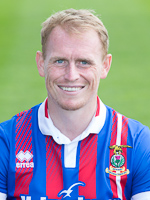 Carl began his career as a trainee at Tranmere Rovers in August 2003 and made his first team debut in December against Hornchurch in an FA Cup 2nd Rd. tie. Signed a full-time contract and made his first league app. in the first team towards the end of that season. Became a regular in the side the following season and went on to make 54 apps. before joining Wrexham in January 2008. Following relegation he moved on to Macclesfield Town where he spent four seasons, making 100 apps. and also went out on-loan to Maltese side Floriana FC before signing for Caley Thistle in 2013.

A firm fan favourite, Carl was made captain of the side ahead of the 2018/19 season when Gary Warren left the club.