The sheep are not on fire:

Inverness came from behind to defeat Aberdeen 3-1 as the sheep were doused whilst Inverness burned their own smoke filled chimney. Apparently a wee fault with the central heating generator filled the stadium with smoke in the second half as goals from Vigurs, Tansey (pen) and Tremarco overshadowed Adam Rooney's opener.

A bitter night in Inverness for the Monday night game which was also televised restricted the crowd somewhat.

The Inverness fans had some bad news prior to kick off as Danny Williams would miss out due to family reasons and David Raven was carrying a knock and would not be risked. That left Lewis Horner at right back and Jordan Roberts started after his game winning cameo at Motherwell.

Adam Rooney spearheaded the Aberdeen attack with Jonny Hayes one of the providers and former Inverness captain Graeme Shinnie was at left back with the Dons' armband. Andrew Considine and Willo Flood only made the bench with new signing Simon Church on from the start.

Aberdeen made the brightest start to the game but both sides looked to get forward at every opportunity, Inverness winning the first corner of the game but it came to nothing.

In the seventh minute Inverness had to thank Owain Fon Williams as he tipped a vicious Graeme Shinnie shot onto the top of the crossbar as the full back burst into the box on the left side. To top it all, drastic referee Willie Collum gave a goal kick. Maybe that helped Aberdeen as from the goal kick, Storey chested the ball down but Vigurs never got it. The Dons broke forward at pace and Craig Storie fed Rooney as the defence backed off and he rifled the ball through Devine into the net.

The Dons looked to be buoyed by this and started to dictate the pace of the game, but Inverness were starting to get forward and saw a bit more of the ball.

In the eighteenth minute Inverness got the break they were looking for as Ash Taylor made a hash of defending and Iain Vigurs accepted the gift, strolled forward and drove the ball behind the exposed keeper.

This stirred Aberdeen into action again and McGinn fired over and did the same a few minutes later as the Dons looked to up their title challenge, but Carl Tremarco headed just wide at the other end.

With almost half an hour gone one of Aberdeens main threats went off injured. Jonny Hayes left the field to be replaced by Peter Pawlett.

Aberdeen target Greg Tansey fired a free kick wide as the game entered a scrappy phase with free kicks coming back in fashion as Collum stopped the game at every opportunity, however there was no more scoring as the half ended.

The second half began as the first ended, fouls galore, but one crucial one given to Inverness was deemed to be a penalty by Collum much to everyone's surprise. But hey ho; we have been on the wrong end of these many times. After Draper bit the turf, Greg Tansey, who else, strode forward and despatched the spot kick with ease to put Inverness ahead.

Almost on the hour and Ash Taylor almost made amends with a header but he headed narrowly wide.

Players were going down like ninepins and the crime count was mounting, but in 65 minutes Inverness went further ahead after some divine intervention by Willie Collum. Jordan Roberts clipped a ball in from the right and the cross was headed to the back post where Tremarco turned up to head home. The linesman flagged for offside thinking the head on was by an Inverness player, but it was off a defender, probably the hapless donkey that is Ash Taylor, and Collum rightly awarded the goal after a short discussion with the linesman.

For the remainder of the game it was the hosts that looked likeliest to add to their tally as Aberdeen looked shell shocked, Miles Storey making a number of superb breaks forward and only the final ball denying Inverness a goal on a few occasions.

Three minutes of added time came and went as Inverness denied the Dons with consummate ease and at the final whistle Aberdeens title challenge took a knock as Inverness went back into the top six.

Well deserved victory for Inverness with Aberdeen resorting to shouting for penalties every time they entered our box. Mind you, one or two of the challenges looked more worthy that the one Draper got. Baaa, what a shame

Great performance all round from Inverness with the defence outstanding and in Miles Storey a tremendous outlet for the back line when under pressure. Jordan Roberts put in a great shift as well before being replaced and Carl Tremarco continued his good run and got a goal to boot. Gary Warren was immense and won the aerial battle along with his partner Danny Devine.

Willie watch. Well, he got some things right, and some things wrong, but you won't find me complaining when he awarded the goal after the linesman flagged it offside. The linesman got it wrong and fair play to Willie for spotting that. 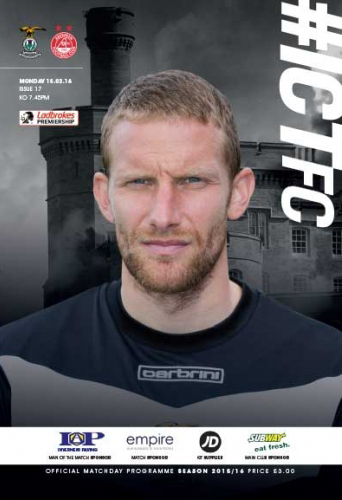