Inverness routed luckless Arbroath 7-0 with a superb attacking display that had the home fans licking their lips in anticipation ahead of the start of the Premiership next weekend.

The first was a howler from Smokies keeper Robbie Mutch as a trickler from Billy King squirmed through his hands and his open legs into the net. Scott Boden (2) and Carl Tremarco made it 4-0 at the break. Further goals from Iain Vigurs, Boden and Tremarco again completed the scoring. He never got on the scoresheet, but Jake Mulraney gave the Lichties defence a torrid time of it all afternoon and they were grateful when he went off after 73 minutes.

A decent day for a game of football and the pitch was in pristine condition as the Fun Day gave way to the Betfred League Cup game with the Red Lichties the opposition.

Aaron Doran was on the bench but Owain Fon Williams returned from his Euro vacation to get between the sticks. We were set up to have a go with Billy King on the left and Jake Mulraney on the right. Ross Draper was left on the bench with Tansey and Polworth doing the donkey work.

Arbroath had former Inverness player Bryan Prunty starting up front, but given their list of missing players, there was only going to be one outcome.

It took only ten minutes for the hosts to open the scoring although visiting keeper Robbie Mutch won't want to see that one again. Billy King looked to have spoiled a brilliant move down the left as he shot rather tamely at the goal. In golfing terms, he topped it. However as Mutch crouched down to scoop the ball up it went under him and trickled into the net. Disaster for the Smokies, maybe the scuffed shot confusing the issue, pleasing for the Caley Jags.

Goal machine Carl Tremarco (yes you read it right) incredibly missed an open goal but Scott Boden scored a beauty as he drilled a shot wide of the keeper eight minutes after the opener from an incisive through ball from Tansey as Inverness built a head of steam.

Arbroath were being put to the sword I'm afraid, and that was before someone switched on Jake Mulraney. This boy is electric, like a younger and quicker Cristiano Ronaldo. He will terrify defences this season with his pace and ball juggling skills.

Iain Vigurs rattled the bar with a header from a King cross as the one sided contest raged on and it was no surprise when Boden scored a third, heading home from close range after a Tremarco cross was headed off the post by King before landing on the strikers napper.

Tremarco would not be denied though and he got on the end of a Raven cross to score the fourth a few minutes before the break. Four up and Arbroath could have no complaints as King and Mulraney were causing havoc on the flanks.

The second half was only two minutes old when Iain Vigurs banged in the fifth from six yards. A tremendous ball from Polworth set Mulraney on his way and he picked out Vigurs who cracked the ball high into the net. For a moment, it looked as though he might have clipped it too high, but it hit the roof of the net for number five.

That goal sparked the Smokies best spell of the game as they had a minor resurgence. Tremarco went back to his defensive duties when he hooked a Steven Dorris flick off the line when the striker should probably have scored and Fon Williams kept out a snapshot from Bobby Linn to keep his goal intact.

After seventy-one minutes normal service was resumed and Scott Boden rounded off his day with a hat-trick, curling in after Vigurs slipped him through as the visitors ran out of power.

Left back come striker Carl Tremarco ended the scoring late on after Gary Warren went on a mazy run, oooh. He picked the ball up around halfway, and waltzed past three defenders. He had obviously been watching Jake closely as he sped forward before teeing up Tremarco to bundle home number seven.

As comprehensive a result as you could ask for. Nobody is getting carried away after this given the difference in class of the opposition, but Jake Mulraney is going to set the Premiership alight if he keeps up this form. The guy is just awesome and well worth the entrance fee alone. He was my MotM despite tremendous displays from Boden, Tremarco, King, well everybody really.

We will have tougher games ahead, but the Foran revolution is taking shape nicely and it was like going back in time to the Pele era as we went for the jugular. Seven goals going on a dozen. Tough luck on Arbroath who will have better days I'm sure, but we had a job to do and did it in style. 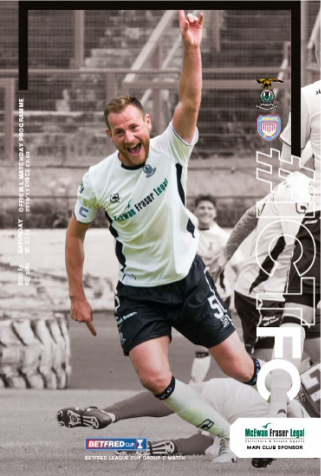