A triumphant end to a fantastic day, season and decade. The sun shone, the ground was packed, there was tension in the air and the First Division trophy was waiting in a helicopter at Braemar. It just remained for the team to make one last major effort and they did just that. Clyde were leading Brechin 1-0 before the Inverness match even started but this changed nothing as it had always been clear that a win was essential. David Bingham headed a Liam Keogh corner past in the second minute then Craig Nelson tipped over a Stuart Golabek shot from 18 yards. A Bobby Mann header from Keoghs corner scraped past the post. In 14 minutes Barry Wilson raced to stop the ball crossing the bye line but Paul Ritchie touched his cross past. The home pressure finally paid off on the half-hour mark in bizarre circumstances. Stuart McCaffreys free kick reached Bingham and his overhead kick fooled Nelson  the keeper backtracked but could only help the ball into the net. This was what most of the crowd wanted and they went wild. It was back to earth just before half-time when Keigan Parker raced through and hammered an equaliser past Mark Brown from long range. Seconds later Wilson scored with a low shot but the offside flag was up. Steve Hislop came on for Keogh in the second half. Saints began to play some good football, particularly through Parker and Simon Donnelly, but ICTalways looked more like scoring. In 56 minutes Binghams through ball set Wilson heading for goal and, as he waited for the moment to shoot, Nelson brought him down. The penalty was a certainty and the pressure was all on Wilson. A trademark short run and it was 2-1. A male streaker joined in the celebrations and was promptly evicted. As the excitement reached fever pitch all that was needed was a third goal to calm the nerves. Roy McBain tried to provide it in 64 minutes with a neat lob over Nelson but it cleared the bar. Bingham headed a Wilson corner goalwards in 71 minutes but Mark Reilly hit it off the line then Stuart McCaffrey headed wide. A third goal came in 76 minutes and fittingly it was from Paul Ritchie who was playing his last game for the club. Wilson took a corner from the left and Ritchie stooped low to head home his 63rd goal in three years. The title was a certainty and the final period was all about waiting for the whistle. Wilson shot wide in 86 minutes then the ball spent vital minutes deep in the Saints half and around the corner flag. The final whistle went, the crowd invaded the pitch, the cup arrived by helicopter, Bobby Mann stepped up to receive the trophy from Lord Macfarlane and the whole of Inverness went ballistic. Now for the SPL  maybe. 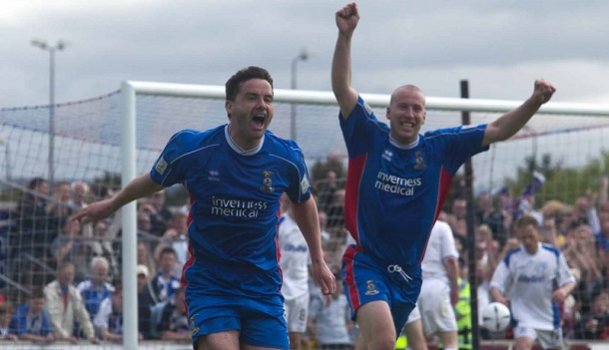