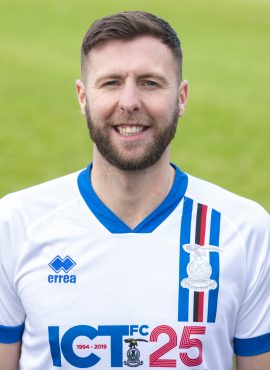 Lewis made his professional debut as a substitute for Scott Brown in a 3-0 league win for Celtic against Aberdeen. That was on 1st February 2011. He has since been on loan to Kilmarnock where he made twelve appearances, and twenty-four loan appearances at Dundee followed. In 2014 he signed for Ross County making nine appearances. He then signed for Cowdenbeath in Feb 2015. the word journeyman springs to mind and on 11th June 2015 he signed for Raith Rovers where he made thirty-one appearances, his longest run at any club. He went on to Dundee United in June 2016 and suffered a serious knee injury in October 2017. Loaned out to Arbroath he suffered a recurrence and the loan deal was terminated. He was then loaned to Brechin City in January 2019. He made eight appearances for Falkirk in 2019 and subsequently joined Inverness in the summer of 2020. He remains injury prone at Inverness and has missed most of pre-season and the start of competitive games this season (2020-2021)
Lewis has represented Scotland at u17, u19 and u21, scoring once for the u21's against Luxembourg.

Sadly, Lewis has left the club by mutual agreement. He made 4 appearances in season 2019/2020 but has been injured since pre-season in 20/21 making no appearances This statement from ICTFC was released on 25th March 2021

Due to family pressures and the subsequent challenges of the pandemic and geographical distance, both the player and the club have sadly come to this mutual conclusion.

The club would like to wish Lewis the very best in his future career and thank him for his commitment both on and off the pitch.