The Season has started:

Inverness beat St Johnstone 2-1 with a Josh Meekings goal in time added on to kill off a stubborn Perth outfit.

It might not have been the best strike Meekings has ever hit, but the important thing here is that the ball ended up in the net and we have finally got our season off and running. With challenging games ahead after the international break, this was a vital win to lift the fans, players and Richie Foran alike.

Ross Draper rose highest in the box to crash a header home, but that goal was cancelled out by a thunderous strike from Richard Foster before the scrambulated (there's that word again) winner after the ninety.

Manager Richie Foran promised a couple of changes and he was bold enough to do just that. Dropping to the bench were Scott Boden, Jake Mulraney and David Raven. In came Alex Fisher, Billy King and Lewis Horner. New signing Lonsana Doumbouya was on the bench also and he would make his debut late in the game.

Tommy Wright had Murray Davidson on the bench, but he would replace Blair Alston at the interval and the dangerous Danny Swanson was looking for his eigth goal of the season playing wide left.

A typically meagre crowd for what has been historically dour affairs saw St Johnstone kick off on a bright and pleasant day for a game of football, the crowd bolstered by Paul Gablonski all the way from down under and wee Ava hoping to see Inverness beat St Johnstone this time.

Staright from the kick off, you could sense that this was going to be be an open game played with pace and a bit of freneticism thrown in. And it was as we took the game to the visitors from the off. Alan Mannus made the first of many saves from a Gary Warren header as we pressed for an opener, and Danny Swanson was drifting past defenders at the other end, creating havoc along our back line but missing the vital telling cross that would create the chances.

The heavily criticised Owain Fon Williams had to look spritely to stop a Steven Anderson header as the Super J's began to get to grips with the game and as play opened out Liam Polworth went close with a shot from outside the box, unfortunately the ball always just the wrong side of the post.

Mannus saved headers from Ross Draper and Alex Fisher in quick succession as we continued to take the game to St Johnstone, but Chris Kane fired over at the other end with the goal gaping. Iain Vigurs, Billy King and Alex Fisher all went close with Mannus required to save two of the three attempts as the game raced towards the interval, but try as they might, Inverness were unable to get the ball behind Mannus who was largely responsible for the 0-0 scoreline at the break.

The chances kept coming after the break and Fisher fired over from the angle. A goal was coming as we kept pressing forward and a cracker it was too, just before the hour.

Billy King drew a foul and a booking from David Wotherspoon and from the resultant free kick, Ross Draper wanted the ball most and he powered a header beyond Mannus for the opening goal. No more than we deserved really.

St Johnstone forays forward were becoming rarer, but in one such attack, Murray Davidson headed wide from a decent position. A warning that the visitors were still very much in the game. St Johnstone sub Graham Cummins was seeing plenty of the ball now as the visitors sensed they might snatch an unlikely draw. He had fired a free kick just over then Williams had to save a header from him.

Wright's men were given some hope though when out of the blue, Foster bludgeoned a shot home with the keeper well beaten with over ten minutes remaining. That goal sparked Foran into action and soon after Lonsana Doumbouya entered the scene. He is slightly ungamely, but looks like he will cause problems with his height and power. Boden and Mulraney joined him on the park soon after as Richie layed all his cards on the table, going for all three points.

Boden brought Mannus into action again and MotM Ross Draper shot narrowly past before testing Mannus with a header. That looked to be it as the clock reached the ninety, but a minute into time added on, Josh Meekings jabbed the ball home after a scrambulation on the goal line when it looked as though the bobbling ball would not fall kindly for us, but persistence paid off and it eventually found the back of the net from Meekings' toe.

Mulraney almost added a third as he broke forward with Saints trying to salvage a point, but he sliced his shot at pace as he drove into the box and it went high, wide and not very handsomely into the North Stand.

A highly entertaining game with both sides giving it a go. You could see what it meant to the players as they broke their duck. Massive celebrations in the corner of the stadium after the goal and relief all round. Richie Foran was delighted to get off the mark as you can see with his match reaction here, talking to Davie, who is showing a tremendous appetite for this interviewing lark.

Lewis Horner did brilliantly coming in at right back and shows plenty of promise when going forward. Fon Williams looked much more assured as his Euro holiday fades into the past. The whole back line worked tirelessly and did a great job of eventually shackling Danny Swanson. Greg Tansey looks as though he is still holding something in reserve and Vigurs and Polworth were good in flashes. Striking has been a problem area but I thought Alex Fisher led the line well and all the substitutes played their part when they came on. But for sheer industry and his goal, Ross Draper was head and shoulders above everyone else and is my MotM.

So, international break coming up, then away to the Dons and home to Celtic after that. Tough games ahead, but nobody said it was going to be easy. However, a weight was lifted off the shoulders yesterday and it should set us up nicely for the rest of the season. Foran is still trying to add a couple of players and that should be good enough to see us start to climb the table. 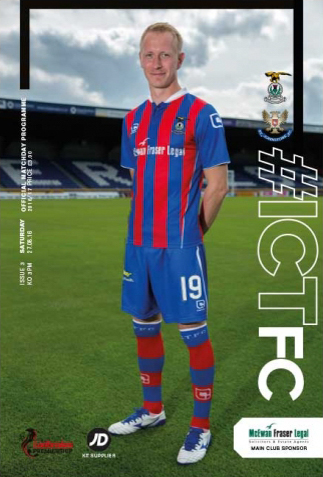