Inverness took all three points with a relatively comfortable 3-1 win over Dundee who have never won in the Highland Capital, and never looked like changing that after the hosts early flurry gave them a two goal cushion. Despite Dundee seeing plenty of the ball, they were unable to do much with it and their dismal form in Inverness continued.

Lonsana Doumbouya nodded his first goal for Inverness in the seventh minute and Greg Tansey lashed home a penalty nine minutes later to give the hosts the lead at the break. A smart third from Liam Polworth settled the game before Inverness took the foot of the gas. Dundee scored from an excellent set piece as Nicky Low picked his spot from twenty yards with six minutes remaining.

Not the most impressive performance from Foran's men, but the three points have catapulted Inverness up to eighth in the table and we remain unbeaten in four now.

Comfortable was the word of the afternoon. Dundee continued their poor record in Inverness as they returned home pointless. ICT took to the pitch looking confident and hoping to add to an unbeaten run of 3 games with only one change from the team that started against Celtic.

The visitors had former Caley Jags player Nick Ross in the starting XI, but Danny Williams and James Vincent were on the bench.

A few eyebrows were raised at the omission, from the starting line-up, of Iain Vigurs but that was soon forgotten when, 8 minutes in, CaleyJags took the lead. Brad Mckay popped the perfect cross into the centre of the box to find the head of Doumbouya who headed into the top left hand corner.

This game was essentially all over 8 minutes later when Etxabeguren was adjudged to have fouled Billy King in the box. From the North stand my view of the incident was poor but it appears King was shoulder barged in the box with a leading elbow and the referee was correct in his award of a penalty kick. Up stepped Tansey and slammed home the spot kick.

The penalty effectively ended the game as a contest. Dundee have not won since the opening day of the season and it showed. They huffed and puffed but could'nt blow the house down, and if it hadnât been for Bain it could have been a rout. They play nice football at times but El Bakhtaoui looked a lonely man up front with non-existent support, although Fon Williams did have to pull off a tremendous reflex save just before the break as we tried to offer Dundee a lifeline.

They certainly looked much brighter in the second half but in 51 minutes any lingering doubts of a Dundee comeback were ended. Brad Mckay earned himself a second assist by charging through the middle and passing perfectly to Polworth who slotted home past Bain.

Polworth could, and should, have added another a few minutes later but decided to pass to Mulraney in front of goal but he fluffed his lines by shooting straight at the keeper. Maybe too eager to get on the scoresheet, but Bain blocked his shot.

The only disappointing part of the afternoon, if being picky, was the failure to keep a clean sheet. Owain Fon Williams did not have to get anywhere near having to repeat the performance of last week. Nicky Low gained a consolation goal from a spectacular free kick into the top corner about 20 yards out in 84 minutes.

Make no mistake this was an important win. These are the sort of games we need to be winning if we have aspirations of top 6 this season. The league table looks a lot more pleasing reading but another 3 points at Hamilton next week could see us climb into a top six slot for the first time this season.

Old Caley Girl MotM:- A harder choice this week. The match sponsors went for Jake Mulraney who continues to show promise. There were competent performances throughout the team. My jury is out on Doumboya though, as he kept earning the referees attention with some awkward challenges. Brad Mckay had an excellent game and looks like he might be a top signing by Foran. My choice however, was the excellent Liam Polworth who bagged himself a goal and was our standout midfielder. He divides opinion, within our support, but more of this type of performance please. 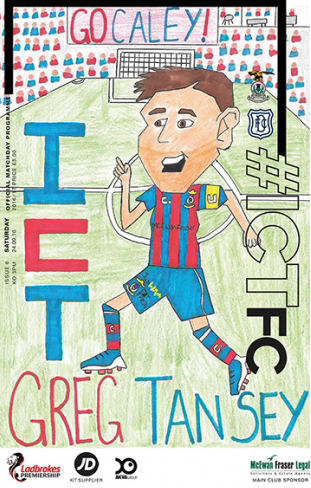