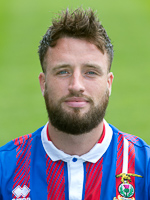 Brad grew up in Edinburgh and was a Hearts supporter. He joined his boyhood heroes from Edinburgh City in 2010 and was loaned out to Penicuik United for the 2010-11 season. He was loaned out again in 2012 to Stenhousemuir and finally made his debut for Hearts in 2013 going on to make 45 appearances and scoring one goal.

Brad signed a pre-contract with St Johnstone in 2015 but after making only 3 appearances for them was loaned out to Dunfermline. On his return from the Pars he was released and promptly signed for Caley Thistle.

He spent five seasons at Inverness making 164 appearances scoring eight goals. Brad was a hard tackling defender and not a stranger to picking up red (4) and yellow (44) cards. Much maligned by sections of the home support he proved to be best suited to central defence but was mostly used as a right back. He has signed a three year deal at Falkirk after the end of season 20/21. All the best Brad.