Inverness took the game to their Premiership opponents from the off and there were plenty of opportunities for both sides, but Jak Alnwick was the busier keeper with Ridgers also making a couple of good saves. Scott Allan saw a shot brilliantly tipped onto the outside of the post after a great run by Carson and Dennis had an effort deflected onto Ridgers's crossbar near the interval. We were heading for extra time when Marcus Fraser popped up almost on the line to stab home after Jon Obika had hit the post. When the ball came back in from the left Fraser was on hand to tap in. Sutherland, twice almost rescued the tie but was unfortunate with both attempts. Great effort from Inverness and good luck to St Mirren in the next round

The last time these clubs met in the Scottish Cup Inverness beat St Mirren 4-0 after a replay in the Highlands. That turned out to be a good year for the Caley Jags as we went on to beat Falkirk in the final in May 2015. St Mirren have upped their game since then and now ply their trade in the Premiership since 2018 and are well entrenched there. We now find ourselves in the Championship but it's the Scottish Cup. Anything can happen; can't it?

Jim Goodwin was banned from the dugout for this game and was without the services of Eamonn Brophy, Ryan Flynn and Colin Quaner. Jon Obika was fit enough to start up front with the dangerous Kristian Dennis and top scorer Jamie McGrath.

Neil McCann kept his side under wraps until inside the final hour before revealing all, with James Keatings and Wallace Duffy out but Sean Welsh back in the starting XI with Roddy MacGregor returning to the bench.

A beautiful evening in Paisley met the sides as they entered the park with Inverness once more in the pink and a minutes silence was observed for the Duke before Inverness kicked off at the SMISA Stadium.

Daniel Mackay appeared to fresh air a lay off in the box from a great position, an opportunity lost as Inverness opened well in the first five minutes.

An audacious acrobatic effort from the tricky Durmus went well over the bar from around the penalty spot in the seventh minute.

Jamie McGrath picked up a loose ball out of defence but shot wide and at the other end Jak Alnwick had to block a shot from Mackay at the expense of a corner and a second great save followed from the same player as Inverness buzzed around the Buddies box.

Ridgers made a super save from Dennis as he entered the left side of the box as the game opened out.

Sean Welsh wasted a well won free kick from the left side of the box, firing the ball two yards over the bar as we approached the twenty minute mark.

Durmus shot just over as he cut in from the left side, his shot from the edge of the box rising just over.

Kristian Dennis had an effort deflected just wide off Brad Mckay for a corner with Ridgers at full stretch covering his post.

After a tremendous break and cross down the left from Dan Mackay, Toddy did brilliantly to get a shot away on the turn under pressure but Alnwick produced a fantastic save low down to his right.

A fabulous break from defence by David Carson saw Scott Allan get a shot on target but again Alnwick denied Inverness with another great diving save.

Doyle-Hayes went off injured six minutes before the break with Richard Tait replacing him.

Out of the blue a long ball by McCarthy found Dennis close to goal, he controlled it well but Carson blocked his shot onto the bar and Inverness cleared. Best moment for Saints in a first half mostly dominated by the visitors.

Second half saw Saint's make a substitution before kick off with Macpherson on for McAllister, but it was Alnwick who was straight into action saving well when Dan Mackay volleyed from the edge of the box. From the deep corner, Inverness took the lead as Nikolay Todorov volleyed brilliantly high into the net.

St Mirren responded immediately when Kristian Dennis shot home from the edge of the box after McGrath layed the ball off for another excellent goal.

Jon Obika unleashed a powerful shot from outside the box but Ridgers did superbly to beat the ball away as the follow up was flagged offside.

Saints were pressing forward and Durmus rattled Ridgers' bar with a wonderful dipping shot from distance.

A chip back across goal was tipped behind for a corner by Alnwick as Inverness responded to the hosts pressure.

Storey set Robbie Deas up with a defence splitting pass but Deas rolled it across the face of goal when a shot might have paid dividends. Minutes later Allardice set Allan through on the right and his low shot whistled narrowly past the keepers far post.

Fifteen minutes left and it had been a highly entertaining Cup tie.

Deas almost broke the offside trap as he gathered a superb ball from Danny Devine but the flag halted him.

Ridgers was fortunate when a long ball into the box was headed onto the base of the post by Durmus and neatly bounced back into the keepers hands. A let off for the visitors.

From a cleared corner, Allardice lofted the ball back towards the goal but it went over the bar and Toddy left the field to be replaced by Shane Sutherland.

Well well, it was fun while it lasted, but with two minutes to go St Mirren went ahead after Obika hit the post, when the ball came back in Marcus Fraser knocked it in from two yards.

Sutherland had a shot blocked as we responded again but time was running out. Sutherland again turned in the box and was a whisker wide in stoppage time but that was the last chance and Saints progress.

What a great cup tie and the visitors can feel aggrieved not to have gone to extra time, but them's the breaks.

Jack Alnwick was probably MotM but all in pink can be proud of their contribution tonight in what turned out to be one of the most entertaining games of the season.

Back to League duty on Tuesday night as we face Dundee. 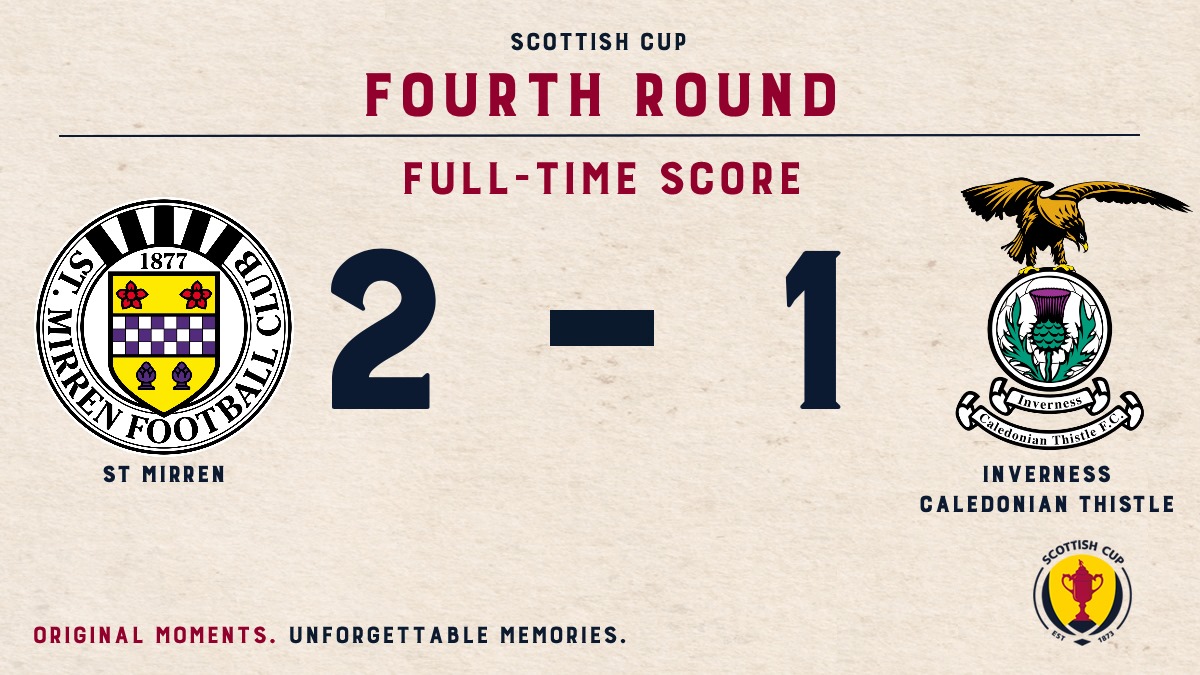