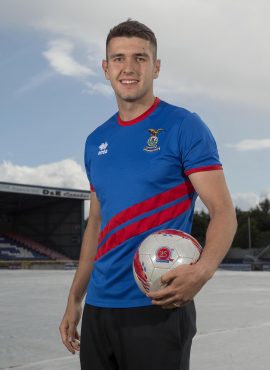 Nikolay Todorov is a Bulgarian footballer who plays as a centre forward in Scotland for Inverness Caledonian Thistle.

Todorov is a Bulgarian U21 international. Known for his physical presence, good in either box in defence or attack; a powerful player and very good in the air; good with both feet. At the age of 7, Todorov started his career with Spartak Pleven's youth system before winning a scholarship in England. In 2014, he joined Nottingham Forest in their Under-21s academy, loan spells followed at Hemel Hempstead and Worcester City in England.

Todorov joined Heart of Midlothian in 2016, loan spells followed at Cowdenbeath and Livingston where he was part of the 2017â18 promotion winning team finishing as Champions. He spent the first half of the 2017â18 season back on loan at Livingston, before spending the second half of the season at Queen of the South also in Scotland.

Bit of a journeyman at only 24 years of age having also played for Rieti (Italian 3rd tier) and Falkirk.

Toddy scored 11 goals in season 20/21 after getting a regular start towards the end of the season and he won the players player of the season jointly with Scott Allardice.