Inverness and St Johnstone served up an utter borefest of a game as anti-football took over the Tulloch Caledonian Stadium. The Perth side took all three points in a 0-1 win over a punchless Inverness who had not a clue how to break down the 10 men of St Johnstone. Both sides should be ashamed of themselves as misplaced passes, poor tackles and miscontrol was the order of the day. Both keepers could have stayed in the dressing room and the score would have remained the same as a 90th minute Liam Craig penalty won the match for the visitors.

It turned out to be a decent day for a game of football after overnight rain, the pitch left moist but it great condition. It should have led to an entertaining afternoon's sport. How wrong can you be.

Inverness were still unable to field a full strength squad and it showed. Carl Tremarco played at left back, but there is still no sign of Jordan Roberts, Tobi Sho-Silva, Gary Warren, Aron Doran, Richie Foran, and Andrea Mutombo was also out. Iain Vigurs made the bench and James Vincent got a start along with Liam Polworth.

St Johnstone had Liam Craig on the bench, but he would be instrumental in our downfall late in the game.

Fon-Williams was fortunate a couple of times as he replicated some of Dean Brills twitchy moment from clearances, having to dive full length to save the first one from rebounding in. That was as close as anyone came to breaking sweat in a dire first half.

Our only half chance came when Tremarco was well blocked by O'Halloran as he broke into the left side of the box, just before he was able to offload.

What a tedious first forty-five, surely the second half would be better?

Well, we didn't know it at the time, but the second half was equally poor, in fact even worse if anything.

Dave Mackay was sent off after catching Tremarco on the halfway line. That would maybe give us the upper hand. No.

Despite the numerical advantage, and oceans of possession, we hadn't a clue how to get behind the Perth bus and were unable to make Mannus work for his bonus. Fon-Williams was equally idle as the Saints looked to hold on for a point. Little did they know how inept we were about to become and in Michael O'Halloran, they had the only player on the park worthy of his wages.

The boredom was now reaching world championship level and it was about to turn into utter chaos as Devine was adjudged to have impeded substitute Liam Craig after ninety minutes had passed. Craig himself took the kick and our misery was complete. 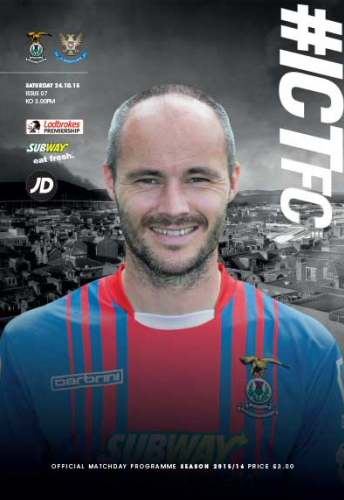