A disastrous opening fixture for injury hit Inverness. Adding insult to injury, (no pun intended), Gary Warren took a nasty challenge from Stephen Pearson and it would appear that the club have confirmed he has broken a bone in his leg. With Meekings also taken off injured and Tremarco, Vincent, Doran, Roberts, Brill, Foran and Ferguson all requiring treatment things look pretty bleak at this moment in time.

I doubt Motherwell will be winning any fair play awards after trying to catch Inverness on the hop. The tried to sneak a goal after play restarted following Warren's injury. Thankfully they guided the shot just wide. Unsavoury incident though.

A truly honking performance from ICT with the tone set early on when Warren hacked down Skippy after only a few minutes of the game gone with our fragmented side struggling to settle into anything approaching a rhythm. As was so often the case with Inverness when Hughes first arrived we were architects of our own downfall and helped Well score the first goal. A slack pass by Tansey was eagerly seized upon by Well and it looked like Fletcher and McDonald linked well to create a chance which was well saved by Fon Williams however he couldn't collect the ball and Fletcher followed in from close range to put Well ahead.

As anyone who has seen an ICT game this season will know we have a lot of the ball but do absolutely nothing with it. As Motherwell sat back and defended in numbers ICT stroked the ball about with no real creative spark to open up the Steelmen. Even on the odd occasion when a break could have been on we seemed content to advance slowly out of defence and keep the ball rather than go for the jugular and try and get right at Well. At one point, collecting the ball from a wasted Motherwell corner we had all of our players within about 10 - 15 yards of the ball in a couple of big lines with no one further ahead of the player with the ball and no one seemingly trying to get into space to try and stretch the remaining defenders. We were exceptionally sluggish whereas Motherwell were much more direct and aggressive with and without the ball chasing it down and snapping into tackles making it hard for us to settle things down.

McDonald missed a penalty after Johnson showed great skill to roll his marker and sprinted into the box only to fall over under what looked like minimal contact from Devine. Regardless, Allan gave a penalty and Fon Williams did well to block McDonalds spot kick which was a nice height for the keeper to get to and keep out. Wedderburn, who was struggling with the quickness of Motherwell players closing him down, was subbed for Mutombo who injected a bit more creativity and pace into a lackadaisical ICT side.

This was pretty much how the first half played out with the only other notable talking point being what looked like a horrendous challenge by Pearson on Warren which resulted in the ICT defender having to be subbed off. Pearson looked like he launched himself hard into a challenge going well over the ball with studs showing. It seemed a clear red card but fortunately for Pearson Allan only showed him a yellow. Pearson himself went off later on as he seemed to injure himself in the tackle as well. Will be interesting to see it again on the highlights if it's covered.

Motherwell started the second half on top and ICT again were in a mess at the back. Some good work down the Well right led to a good chance to extend their lead but fortunately an effort by Fletcher (I think) hit the post/was saved by Fon Williams. Not long after that Chalmers (I think) who was still up from a corner looked certain to score as he waited to tuck away a loose ball from only inches out but somehow Draper came in to clear the ball away.

The second half largely replicated the first with Well starting strongly and ICT struggling to create anything. A half hearted penalty claim from Tansey who looked like he may have been clipped in the box and a free kick late on from the same player which was headed wide were as close as ICT came to threatening anything close to a goal in a match that was not high on thrills.

A good win for Motherwell who looked comfortable throughout but a concerning defeat ICT who, despite missing a lot of first team players, struggled again to create any really good scoring chances. With Meekings and Warren both coming off injured our back four is completely unrecognisable from that of last season. If we aren't going to score then we could at least have looked to a relatively resolute defence to keep the opposition out. It will be interesting to see how a potentially patchwork backline deals with the upcoming games against St Johnstone and Partick. 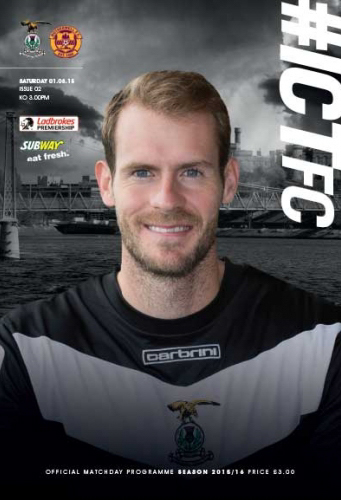