Celtic ran out relatively comfortable 1-3 winners eventually, after the Caley Jags had matched them all over the park except in the vital goal scoring area. Miles Storey levelled the game before half time after Callum McGregor replicated his goal against Ajax. After the break Leigh Griffiths scored from close range and Carlton Cole managed to handle the ball into the net off Danny Devine's shins for what could be described as a scrappy own goal.

Heavy rain meant an early pitch inspection ahead of this televised game. Inspection passed but the horrendous weather would make for a heavy pitch as Vivaldi's Four Seasons was played out in one day.

Gary Warren made a welcome return to the starting X1 along with Ross Draper, but there was no room for David Raven who was joined on the bench by Andrea Mutombo and Tobi Sho-Silva. Danny Williams went to left back and Josh Meekings was the preferred option at right back.

Celtic continued with Kieran Tierney in defence and Scott Allan on the bench, but there was no sign of the struggling Kris Commons. Anthony Stokes was on the bench as his twitter account revealed. Something that would not best please the Celtic management team.

Both sides started crisply but Celtic took full advantage from a third misplaced pass in a row from Josh Meekings. The ball was transferred swiftly forward and Mcgregor raced towards the home goal and planted the ball beyond Fon-Williams as the home defence went into reverse. We are in good company here as this was a photo-copy of the goal he scored in midweek against Ajax.

Craig Gordon was fortunate to keep out a point blank header from Warren. Not sure he knew much about it, but the ball stayed out of the net and from the ensuing stramash, Meekings slid a sot just wide.

We had responded well to the early setback and we forced a couple of corners but to no avail and at the other end Lustig headed wide after a Celtic corner.

In the 38th minute, Miles Storey broke into the box chasing a neat ball from Polworth who did well when he robbed Armstrong in midfield. His initial shot was saved by Gordon but the ball broke kindly for the speedy hitman and he mopped up by slotting the ball into an empty net.

Bitton shot wide as the game approached the break but all square at the interval was no more than Inverness deserved.

A positive start to the second period saw Draper head just wide as we looked to get our noses in front. Celtic responded with a hat-trick of corners which came to nothing before introducing Scott Allan for the struggling Stuart Armstrong.

That substitution injected a bit more urgency about the visitors and just before the hour Tierney and Allan combined down the left to set up Griffiths to hammer the ball high into the net from six yards for a smart finish from the Champions.

Inverness were restricted to containing Celtic as the visitors tried to assert themselves on proceedings and this was having a detrimental effect on our attacking options. Most of our good work was being done in midfield and neither keeper was being overworked.

Carlton Cole almost made an instant impact as he headed downward, but Fon-Williams was alert and saved well, however, the cumbersome Cole was instrumental in the goal that killed the game. Leigh Griffiths unleashed a powerful shot that Williams did well to Parry. The ball hung around the Inverness box and with Cole lying on the deck, he appeared to nudge the ball with his hand/arm onto the unfortunate Devine who could only watch in dismay as the ball trundled into the corner of the net. Goal given and game over with around ten minutes of play left.

Mutombo and Sho-Silva also got some game time but were not able to influence this game as we ran out of time and ideas.

We competed well and it was encouraging to get Warren and Draper on from the start. Same old problems of not creating enough really and although the third goal should not have stood, we never quite did enough to warrant getting anything from the game after the break.

This result has us staring at the play off position, but still within touching distance of the top-six. We don't play Celtic every week so all is not lost as we get more players up to speed. The news that Yogi has signed on for another couple of seasons has been welcomed by most involved with the club and we can now focus on climbing away from danger and maybe even a wee cup run, starting at Stirling Albion in January.

The two players that combined for our goal were the pick of our bunch with Fon-Williams making a couple of excellent saves as well, but Hughes can now maybe sort out a contract for MotM and top scorer Miles Storey now that his own destiny has been decided. 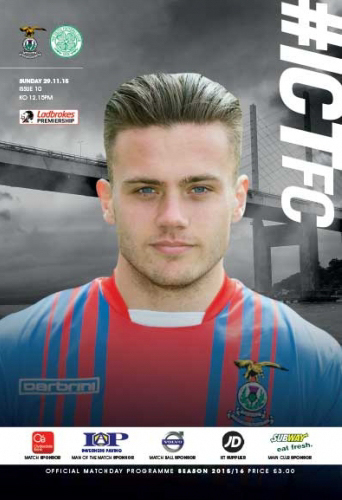