Inverness eased into the 5th round with a 2-0 win over Stirling Albion, but it took two superb strikes from Andrea Mutombo and Iain Vigurs to settle the tie against the League Two side.

Danny Devine was returned to the heart of the defence after suspension at the weekend and Andrea Mutombo was given a start. Danny Williams was at left back with Carl Tremarco out.

A brisk night met the players as they emerged from the tunnel and the crowd was kept to a minimum with Sky Sports covering the game.

The first dangerous action of the tie was when Danny Williams brought down Steven Doris on the edge of the box. Doris took the free kick himself and curled his effort over the bar. Encouraging start for the Binos and they foraged forward again only to be blocked on the edge of the box at the expense of a corner which came to nothing as Ross Smith shot just wide.

It's the League Two side that were making all the early running against a struggling Inverness, but Gary Warren almost scored with a header after a corner, however the ball got smuggled away from the six yard box and away from danger.

Andrea Mutombo is able to showcase his twinkle toed skills and he curled a shot just over after fifteen minutes as Inverness begin to get to grips with the game. Five minutes later and Liam Polworth shoots over as the early Stirling threat seems to have evaporated, but the home side will need to up their accuracy if they want to progress.

Back come the Binos though and Ross Smith heads wide to make sure Inverness are kept on their toes.

Mutombo has had enough though and goes on another dazzling dribble. This time he cuts in from the left and ends it by exploding the ball behind Chris Smith from 25 yards into the keepers top right hand corner. Extreme goal from the one man showing the ability to get behind the Binos defence.

It's all Inverness now and constant pressure brings about a couple of half chances but the final shots get snuffed out, Vigurs and Draper looking to add the second.

Despite dominating, we are still finding it difficult to create any premium opportunities to get the second goal and too many crosses and passes are going astray allowing Albion time to regroup and remain in contention. Goal apart, that's another uninspiring 45 minutes from Inverness against a resolute Stirling Albion as the half fades out.

The poor touches and poor lay offs continue at the start of the second half, but as Inverness break forward, Ross Smith earns a booking for stopping Danny Williams dead in his tracks.

Mutombo is still the one stretching the back line of the visitors defence and he pings a ball across goal, but the defenders hook it clear.

Flattering to deceive springs to mind as Inverness play the ball back and fore across the Binos defensive line before once more overrunning the ball.

Ten minutes into the half and a free kick causes a bit of urgency in the Inverness box before Mark Lamont fires over from outside the box. Better spell for the visitors as they force a corner and another scrambulation in the home box.

Mutombo is still the main threat and he earns a free kick 25 yards out. Iain Vigurs wastes the chance as he hits the defensive wall.

He would atone for that a few minutes later. Inverness broke from the back at pace. Raven fed Storey who held the ball until Draper found space. He raced forward before cutting back to the incoming Vigurs who guided the ball into the top corner from 18 yards for another stunning goal. Pick that one out.

Inverness once more on the ascendency but more overplay results in Williams crossing behind after some tidy midfield passing.

Draper got booked for upending Lamont, a bit soft looking, but it is Ross Draper, and Storey forged his way down the left after riding two challenges. Vigurs goes down in the box and all he got for his troubles was a booking. Oh dear.

Two nil up, but we have been here before, Albion not blown out yet with 20 minutes to endure as Storey has an effort saved.

Craig Beattie enters the tie as Stirling look to get back into the game, Ross Smith leaving the field and Alex Fisher replaces Liam Polworth with fifteen left.

Tremendous work by Williams down the left allows Storey to thrash a ball goalwards, but Smith is equal to it and palms the shot away for a fruitless corner.

Richie Foran and Jordan Roberts get some game time as Draper and MotM Mutombo leave the pitch.

That sparked the visitors into life again as they forced a couple of corners, but it was Danny Devine that almost curled in a third goal, the ball almost shaving the outside of the post as it went just wide.

Jordan Roberts' impact was almost instant. He was booked minutes after coming on. Oh well, we have waited long enough to see him on the park, I suppose any publicity is good publicity.

Oh ffs, Alex Fisher is helped off the park with what looks like an ankle injury, that's all we need, and Stirling Albion end the game as they started, on the front foot. A free kick from Doris, a corner and a lob from Darren Smith going narrowly over the bar with Fon Williams stranded.

This game was won by the home side with the aid of two tremendous goals, both contenders for goal of the round. Stirling battled hard but it was Inverness who controlled the game and created the chances to get themselves into the next round where Motherwell await.

Tonight's MotM goes to Andrea Mutombo. He did a power of work tonight dragging defenders all over the place and his trickery saw him ghost past a few in tight situations. His goal was a tremendous individual effort after drifting in from the left wing then unleashing a stunning strike from 25 yards. Miles Storey did nothing right in the first half but did plenty of unselfish sprinting after the break, unlucky not to score on a couple of occasions.

From a selfish point of view, it would have been nice to score a barrowload of goals, but it's credit to Stirling Albion that we never as they stuck to the task and finished the game at our end of the park. Good luck to them for the rest of the season, the banana skin put away for another year.

It's Fir Park for us on the weekend of 6th February in the 5th round :ictscarf: 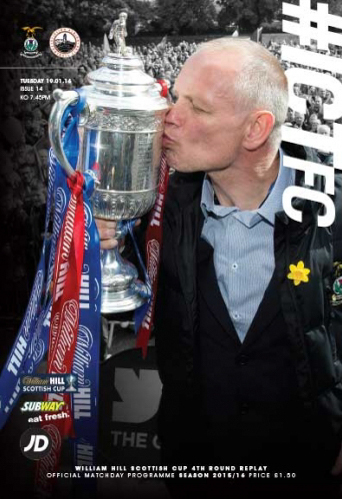