A shambolic team selection and performance saw Inverness gift Hibs safe passage into the semi-final with a deserved 1-2 win at Inverness, as Yogi goes from hero to zero in less than a year.

Hughes kept all his attacking options on the bench for reasons only he will know and at the back we handed Hibs the opportunity to advance, and they did so with Anthony Stokes capitalising twice. That left Inverness with too much to do in the second half and we fell short despite getting one goal back through Iain Vigurs with almost fifteen minutes left.

Hibernian took a large following to the Highland capital for this cup replay despite the disappointment of losing the League Cup final to Ross County on the Sunday. They had Jason Cummings up front with Anthony Stokes backing him up. Dylan McGeough failed to make the squad.

John Hughes' line-up was the subject of much ridicule and probably one of the main reasons we are out of the cup. Despite the fact that we have struggled to score goals of late, Yogi chose to leave attacking options Miles Storey, Jordan Roberts, Danny Williams and to a lesser extent Liam Polworth on the bench. Instead we had Richie Foran starting after months out, Liam Hughes an almost untried midfielder at centre forward and Josh Meekings at right back for his first start in ages. Andrea Mutombo was not fit enough to make the squad.

It was our defence of the trophy and surely we would take the game to Hibs to try and retain the trophy against the Championship side who have not won in five games.

We began by getting forward well, but as is our frustrating habit of late we were soon void of attacking intent as Hibs got to grip with the game, realising that we were not an attacking threat. By playing Hughes up front, we seemed to abandon our sideways passing game and opt for route one, but more often than not the long balls were floundering on the heads of the visiting defenders.

Hibernian went ahead after Stokes benefitted from a defensive cock-up. A decent ball in by Lewis Stevenson from the Hibs left saw Devine and Tremarco go for the same ball. Devine got a touch which flicked it over Tremarco and Stokes was on hand to receive the gift and stroke the ball home from eight yards.

Five minutes later and the Cup was back in it's box ready for sending South. Danny Devine has become the master of disaster recently and he messed up trying to pass the ball out of defence. He scuffed his clearing pass five yards into the path of the impressive Liam Henderson who sped into the box before cutting it back to Jason Cummings. He got his shot away and Fon Williams saved brilliantly, but the ball fell nicely for Stokes who won't score an easier double than this.

What were Inverness doing while all this was happening? Well, nothing really apart from a comedy of errors, and the half ended with boo's ringing in the ears of the home side, the away fans in fine voice though.

Another feeble first half would surely see a couple of changes at the interval, but no, Yogi persevered with his starting choice.

Desperation was evident as we surged forward and Tremarco should have done better than stab a deep cross well over from five yards at the back post.

Iain Vigurs hit a sweet right footer from 25 yards but Oxley was well placed to save as Inverness struggled to create the clear opening they needed.

Fifteen minutes later, the Inverness pressure paid off when Iain Vigurs was on hand to knock in a Foran header back across the box.

Five minutes later and more comedy gold when Oxley clashed with Hughes as he blocked the makeshift strikers stab at goal. There followed a series of calls for medical attention for the keeper seemingly unable to see properly after dislodging one of his contact lenses. A booking for time wasting followed before he slumped to the ground, eventually being substituted.

Seven minutes of added time resulted from that farce but we huffed and puffed without blowing the house down. In fact, Hibs could have scored a third or fourth as we threw everyone forward in an attempt to salvage something from he wreck, but good goalkeeping and poor finishing saw the game end 2-1 in Hibs favour and our defence of the cup was over.

Oh dear Yogi, what have you done. Seriously cheesed off lots of fans tonight with the team selection and tactics. Hibs at least tried to play football while we looked like a Highland League outfit. We missed a tremendous chance to get into another final and it has been snubbed as the players struggled to find any momentum. Fair play to Hibs, they did what they had to and I'm afraid the buck stops with John Hughes for that performance. His player selection was absolutely horrendous and one wonders what he was thinking about. We were the home side and we needed to go out and take the game to Hibs. Playing without forward minded players was not the right thing to do.

MotM. I don't think I could pick one player from that shambles. I suppose Owain Fon Wiliams did nothing wrong and he did make a couple of excellent saves so he is my choice. Those certainly not considered were Liam Hughes, Carl Tremarco, Danny Devine, Josh Meekings, Lewis Horner, Ross Draper or Nat Wedderburn. Richie Foran, Gary Warren and Iain Vigurs get pass marks for neatness. We looked slightly more dangerous with the introduction of Storey, Williams and Polworth, but the horse had bolted by then and like lots of games this season, it was too little too late.

Next up is County away. I'm not sure quite so many fans have the stomach to take this one in given our recent demise. 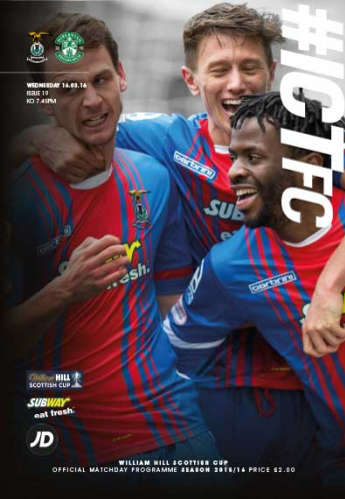