Inverness managed to get three points in a 2-1 victory, but not before losing another late goal to keep the fans on edge. An Iain Vigurs double saw us cruise in at the break two up but we conceded a late goal to give Killie a sight of the points. Mark Connolly scored with three minutes left but we managed to see out the game and get a much needed three points.

This was a must not lose game and we achieved that. However, we made hard work of it in a poor second half showing when we let a sloppy Kilmarnock off the ropes and gave them every encouragement that they could possibly take something from a game that should have been well beyond them.

John Hughes had a stronger squad available for this one as players returned from injury. Oddly, he still persists with Raven and Horner on the bench and Josh Meekings at right back with Danny Devine partnering Gary Warren at the heart of the back four. Carl Tremarco, Tobi Sho-Silva and Andrea Mutombo all started on the bench but all three of them would feature later in the game. Nat Wedderburn started this one with Ross Draper nowhere to be seen.

Killie were much as expected with Kris Boyd and Josh Magennis the target men and a small band of hardy supporters had made the long trek to back the Ayrshire club.

The opening exchanges were fairly even with Inverness doing their usual crisp passing without any penetration. We needed a little help and Kilmarnock duly obliged in the fourteenth minute. Comedy defending by two Killie players near the corner flag allowed Polworth to smuggle the ball from them. He ran along the line before teeing up Iain Vigurs who had the simplest of tasks to tap the ball home. An early Xmas present for Inverness, gift wrapped by the Kilmarnock defence.

For all our dominance and good possession, we were still creating very little in the final third and more often than not seemed reluctant to build on our fortuitous start to the game.

Kris Boyd gave the home fans cause for concern when he fired a powerful free kick a couple of feet over the corner of Fon Williams bar as Kilmarnock tried to get back on level terms, however it was Inverness who were busier around the penalty box, but without making keeper Jamie MacDonald work.

That changed just after half an hour into the game and there was nothing fortunate about this one. We tore into the Kilmarnock defence down our right flank. Miles Storey got the better of the defenders this time and he rifled a ball into the box. James Vincent stepped over the ball and Iain Vigurs was left with time to pick his spot.

Conrad Balatoni eventually got the booking he so richly deserved. The guy is a clown, getting his card not long after handbags when he tried to steal the ball when we were looking to take a throw in. Could easily have been an early bath for the hot-head.

The half ended without much further ado and a comfortable position for Inverness to build on, surely.

Gary Locke decided enough was enough and he rang the changes at the break bringing on Carrick and Kiltie to replace Slater and Obadeyi.

This appeared to inject a bit more urgency to the visitors, but Owain Fon Williams was still pretty much a spectator in the Inverness goal.

We helped the Kilmarnock cause by being content to pass the ball sideways for long spells without looking to kill the game off and that would cause some unease in the stands.

Storey limped out of the game on the hour being replaced by Andrea Mutombo, who's fleet of foot would entertain us for a bit although we were looking to kill the game off.

We were content to hit on the break and at least half a dozen good bursts forward went without troubling the keeper as our efforts fizzled out before working the Killie defence.

Liam Polworth missed the best chance of the half as he burst into the box after some intricate play just outside of it. Unfortunately he could not wrap his foot round the ball properly and he slid his shot just the wrong side of the post from close range.

The game was slipping away from a lifeless Kilmarnock but we offered them a little help after failing to mop up from a corner. Mark Connolly scored from close range to unsettle the home support and set up a fraught last few minutes of play.

Still time for substitute big Tobi to ruffle the side netting from a tight angle as we went seeking a third and Tansey brought out a save from MacDonald. We weathered the final moments fairly comfortably despite Killie winning a corner to keep their hopes alive.

Hard earned three points beginning with a gift from Kilmarnock. Cracking second goal and relatively comfortable passage despite Killie scoring late. Liam Polworth was a standout with his driving runs and incisive passing and is my MotM. Well backed up by Nat Wedderburn, especially in the first half and two goal hero Iain Vigurs. We tried to let Kilmarnock back into the game but they were unable to accept our generosity and were really there for the taking, but likewise, we were unable to give them the doing they should have had. However, a welcome three points which moves us in the right direction, up to seventh, but little in it between seventh and eleventh where Kilmarnock now find themselves.

Next up is Dundee United, another must not lose game. Keep the faith as we look to enter the top-six. 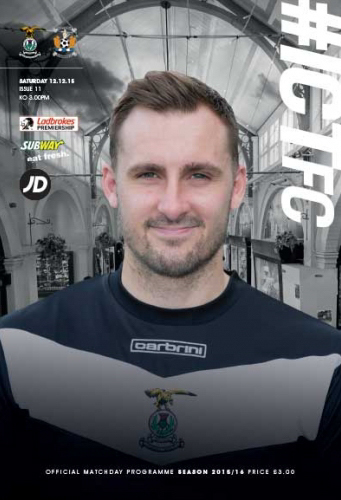