and two Europa League games into the season and it is clear that Caley Thistle are certainly not firing on all cylinders up top ! After 270 league minutes and 180 European ones its a tally of only a single goal from Ryan Christie. This time last year we had amassed a solid 7 points from 3 games scoring 4 times in the process and conceding none. Its going to be a long hard season ......

@ICTRoughi provides the report from this game .....

Inverness shared the points with Partick Thistle which again like last Saturday could have been all three. Caley Thistle added to the squad before the game in the shape of former ICT player Iain Vigurs.

Caley Thistle started the game well with a quick surge of attack but like most of the first half it didnât really mount to much and we unfortunately had no end product in the final third.

In the first 15 minutes Mathias Pogba was forced off due to an injury in which they replaced him with Kris Doolan who can be quite a handful up front but Ross Draper and Danny Devine like the St Johnstone game combined for a good defensive pairing. Since Gary Warren and Josh Meekings have been out of the side since their injuries, I have been particularly pleased with the performance that Devine has been giving - very intelligent defending.

After Pogba went off, the game seemed to open up and the two teams looked evenly matched. Kris Doolan nearly made it a perfect start for him after found space to drill the ball however Owain Fon Williams was quick to react and pushed past the post. Where I was positioned in the north stand, it looked like an outstanding save.

Caley Thistle again started the half in frantic fashion and then gaining a corner but unfortunately it never mounted to much.

The two teams continued to battle in the middle of the park and Dani Lopez nearly got his first goal for the club with a shot outside the box but unfortunately went to the right of the goal.

Partick Thistle nearly got the opener when Steven Lawlessâs powerful shot forced Owain Fon Williams into another top notch save which bounced off the crossbar.

On the hour mark, John Hughes made the substitution of bringing on Iain Vigurs replacing Lewis Horner. After 30 seconds of Vigurs being on the pitch, he received a booking for pretty much annihilating Abdul Osman - good start.

Around about 10 minutes later, Inverness got a free kick in dangerous territory. Caley Thistle fans had previously stated that his free kicks will become an asset to the club and they were nearly proven right when his free kick was drilled low and fizzled past the post.

For the final 20 minutes of the game Inverness started to bombard Partick Thistle with attack after after attack in which Danny Williams was the starting point of the attack. You would actually be forgiven if you thought that Graeme Shinnie was playing left back tonight because Williams was that good. Unfortunately like the game itself, chances were being wasted.

Andrea Mbuyi-Mutombo done really well in the dying minutes of the game to get the past the Thistle defenders but unfortunately Tomas Cerny got the better of him, it just wasnât going to be our night.

I suppose it will only get better for us unless you have to go to Celtic Park after they themselves dropped points - gulp! 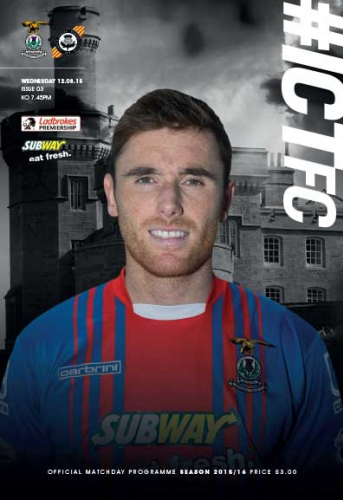