Inverness ended Aberdeen's winning start to the league campaign with a 2-1 victory in the Highlands. This was no more that John Hughes' side deserved after a scintillating first half where the scoreline flattered the undefeated Dons.

A large crowd were expected with Aberdeen getting 500 extra tickets hoping to see their side get back to winning ways after their shock defeat at the hands of Hibernian in the League Cup in midweek.

It was an excellent day for a game of soccer and the large crowd were about to witness a devastating start for Inverness.

A couple of surprises before kick off with Carl Tremarco out and Danny Williams dropping back to defence to cover that. In came Liam Polworth to midfield. Still no Tobi Sho-Silva, but the rapid Miles Storey started up top again.

Derek McInnes sprung the bigger surprise after telling everybody that Graeme Shinnie would not make this game. But make it he did. His other surprises were having David Goodwillie and Adam Rooney starting on the bench. Jonny Hayes returned after suspension and Kenny McLean and Josh Parker accompanied him up front.

Owain Fon-Williams was the first keeper called into action as he dived low to his left to turn a 30 yard effort from McLean round the post.

That was the last we would see of Aberdeen as a goal threat until the second half.

Inverness took the lead in the seventh minute and a fantastic goal it was too. James Vincent won the ball wide left on the half way line. He fed it inside to Greg Tansey who moved it on to Liam Polworth and he dropped it back to Ross Draper just inside his own half. The big man surged forward before feeding the ball to Ryan Christie. He spun and left his marker Graeme Shinnie for dead before sliding a precision pass to the feet of Miles Storey. He in turn sped forward five paces before rifling a shot across Ward and into the net from fifteen yards to stun the big away support behind the goal.

Christie was causing havoc every time he got the ball, and he delivered another inch perfect pass for the runner who was Draper this time. Unfortunately, instead of putting his laces through the ball, he tried to dink it in and his effort was blocked by Paul Quinn eight yards from goal and a grateful Ward gathered the loose ball.

Danny Williams injured himself making a thunderous tackle that also took out Meekings. As play raced to the other end, Storey teed up Liam Polworth, but Ward pulled off a tremendous one handed save diving high to his right to deny us a deserved second goal. After treatment, Williams was able to continue.

However, our delightful attacking display paid off when Ryan Christie smashed a thirty five yard strike high beyond Ward and into the roof of the net. Draper involved in this again after breaking up play, but what a strike from Christie and no more then we deserved.

Aberdeen were down and out at this point but we handed them a lifeline when Devine failed to deal with a cross into the box, his header going for a corner instead of the expected throw in. From the corner, Ash Taylor lost his marker and headed down and up into the net unchallenged. Sloppy from us and a gift for Aberdeen to kick start their game.

Christie tried to replicate Taylors header at the other end but again Ward kept the dons in touch with another superb save.

The half time whistle saved the visitors from further punishment and we went in with a scoreline that flattered Aberdeen.

Could we sustain the attacking threat we showed in the first forty-five? Well, the answer was no and that was obvious as we handed the midfield over to the Dons, inviting them forward to try to level the game.

Aberdeen players were now falling to ground at every opportunity as they camped around our box, winning a number of free kicks in dangerous positions, but without troubling Fon-Williams.

From one such opportunity, Peter Pawlett rattled a post, although Fon-Williams might have helped it onto the woodwork. Either way he had it covered and the danger was cleared.

They did beat the keeper soon after, but Danny Devine popped up from nowhere right under the bar to head the ball away from the net. Now that was a close call. Not the first time Devine has done this either.

Aberdeen made it an uncomfortable last fifteen minutes for Inverness with Rooney and Goodwillie on the park but we weathered the late storm and held firm. Our own sub Mutombo took the ball forward a couple of times late on to ease the pressure, but it certainly made a few keeky winkers twitch every time the ball entered our box, but the home side managed to stop Aberdeen's winning start and get a welcome three points for themselves.

Only black mark was the sending off for Ryan Christie after his second yellow card for upending the same player. Yes, you've guessed it, that player was none other than our old Captain Graeme Shinnie. Welcome back Graeme.

Tremendous first half for Inverness merited this win as they took the game to there more fancied opponents. Ross Draper was involved in lots of the action and Christie's turn that saw him leave Shinnie awol for the first was also exquisite and his threaded passes were game winners. Despite that sending off, Christie was superb in every way and his goal is one to treasure. For all of that, he is my MotM. He was ably assisted by the rest of the side, and Devine, Meekings, Draper, Fon-Williams and Storey were easy on the eye as well.

Sorry Hamish, but someone had to do it, and it might as well have been us. Onwards and upwards, exciting times ahead, with the local derby next week in Dingwall. 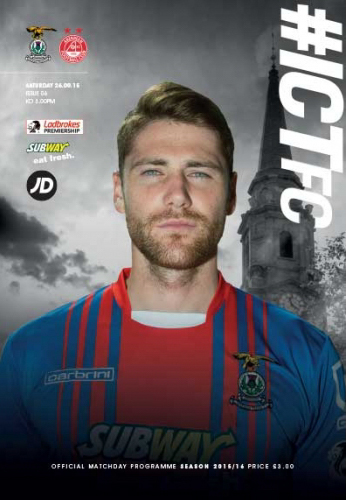